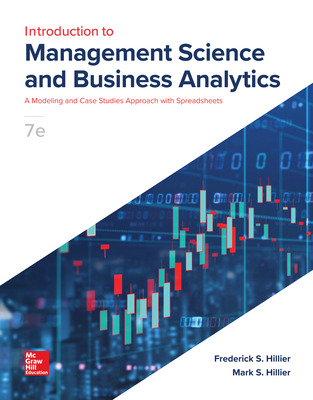 Hiller's Management Science and Business Analytics: A Modeling and Case Studies Approach with Spreadsheets, 7e in its newest edition introduces both Management Science and Business Analytics in chapter 1 emphasizing the close relationship between them. The new Chapter 2 is an overview of how MS and BA professionals analyze problems and their similarities, chapter 3 is a new chapter on the role of data mining, clustering classification prediction methodology, some algorithms for implementing this methodology, a powerful SW package for data mining and more. Chapter 4 will continue to focus on key techniques of Business Analytics to complete part 1 of the text and the final chapters are focused on Prescriptive and Predictive Analytics based on models based on Linear programming models, Other Certainty Models, and Uncertainty Models.

Professor emeritus of operations research at Stanford University. Dr. Hillier is especially known for his classic, award-winning text, Introduction to Operations Research, co-authored with the late Gerald J. Lieberman, which has been translated into well over a dozen languages and is currently in its 8th edition. The 6th edition won honorable mention for the 1995 Lanchester Prize (best English-language publication of any kind in the field) and Dr. Hillier also was awarded the 2004 INFORMS Expository Writing Award for the 8th edition. His other books include The Evaluation of Risky Interrelated Investments, Queueing Tables and Graphs, Introduction to Stochastic Models in Operations Research, and Introduction to Mathematical Programming. He received his BS in industrial engineering and doctorate specializing in operations research and management science from Stanford University. The winner of many awards in high school and college for writing, mathematics, debate, and music, he ranked first in his undergraduate engineering class and was awarded three national fellowships (National Science Foundation, Tau Beta Pi, and Danforth) for graduate study. Dr. Hillier’s research has extended into a variety of areas, including integer programming, queueing theory and its application, statistical quality control, and production and operations management. He also has won a major prize for research in capital budgeting.

Associate professor of quantitative methods at the School of Business at the University of Washington. Dr. Hillier received his BS in engineering (plus a concentration in computer science) from Swarthmore College, and he received his MS with distinction in operations research and PhD in industrial engineering and engineering management from Stanford University. As an undergraduate, he won the McCabe Award for ranking first in his engineering class, won election to Phi Beta Kappa based on his work in mathematics, set school records on the men’s swim team, and was awarded two national fellowships (National Science Foundation and Tau Beta Pi) for graduate study. During that time, he also developed a comprehensive software tutorial package, OR Courseware, for the Hillier-Lieberman textbook, Introduction to Operations Research. As a graduate student, he taught a PhD-level seminar in operations management at Stanford and won a national prize for work based on his PhD dissertation. At the University of Washington, he currently teaches courses in management science and spreadsheet modeling.