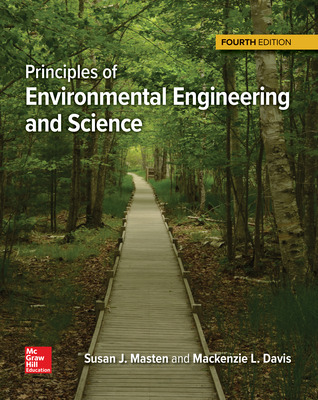 Appendix A: Properties of Air, Water, and Selected Chemicals

Appendix B: List of Elements with their Symbols and Atomic Masses

Susan J. Masten is a Professor in the Department of Civil and Environmental Engineering at Michigan State University. She received her Ph.D. in environmental engineering from Harvard University in 1986. Before joining the faculty at Michigan State University in 1989, she worked for several years in environmental research at the University of Melbourne (Australia) and at the US Environmental Protection Agency’s Kerr Laboratory, in Ada, Oklahoma. Professor Masten’s research involves the use of chemical oxidants for the remediation of soils, water, and wastewater. Her research is presently focused on the use of ozone for reducing the concentration of disinfection by-products in drinking water, controlling fouling in membranes, and reducing the toxicity of ozonation by-products formed from the ozonation of polycyclic aromatic hydrocarbons and pesticides.

Dr. Masten is a member of the following professional organizations: American Water Works Association, Association of Environmental Engineering and Science Professors (AEESP), and American Chemical Society. She has served as the chair of the AEESP Publications Committee since 2013. Professor Masten was a Lilly Teaching Fellow during the 1994–1995 academic year. She is also the recipient of the Withrow Distinguished Scholar Award, College of Engineering, MSU, March 1995, and the Teacher-Scholar Award, Michigan State University, February 1996, and the Withrow Teaching Award in 2012 and 2018. Dr. Masten was also a member of the Faculty Writing Project, Michigan State University, May 1996. In 2001, she was awarded the Association of Environmental Engineering and Science Professors/Wiley Interscience Outstanding Educator Award, and in 2013, she was awarded the Lyman A. Ripperton Environmental Educator Award by the Air and Waste Management Association. Professor Masten was awarded an Erskine Fellowship in 2018 from the University of Canterbury, Christchurch, NZ. Dr. Masten is a registered professional engineer in the state of Michigan.