Ferdinand Beer and E. Johnston and David Mazurek and Phillip Cornwell and Brian Self Vector Mechanics for Engineers: Statics and Dynamics https://www.mheducation.com/cover-images/Jpeg_400-high/125963809X.jpeg 12 2019 January 29, 2018 9781259638091 Vector Mechanics for Engineers helps students analyze problems in a simple and logical manner and then apply basic principles to their solutions, encouraging a strong conceptual understanding of these basic principles. Offering a unified presentation of the principles of kinetics and a systematic problem-solving approach, the text has proven to be an effective teaching tool, especially when paired with the digital resources available in Connect.
09781259638091 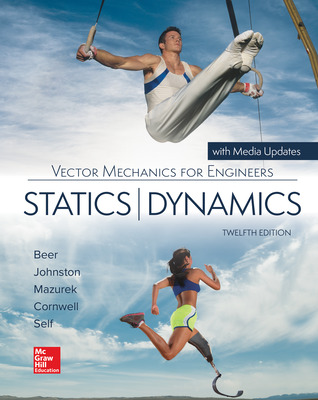 Vector Mechanics for Engineers helps students analyze problems in a simple and logical manner and then apply basic principles to their solutions, encouraging a strong conceptual understanding of these basic principles. Offering a unified presentation of the principles of kinetics and a systematic problem-solving approach, the text has proven to be an effective teaching tool, especially when paired with the digital resources available in Connect.

Born in France and educated in France and Switzerland, Ferdinand Beer held an M.S. degree from the Sorbonne and an Sc.D. degree in theoretical mechanics from the University of Geneva. He came to the United States after serving in the French army during the early part of World War II and taught for four years at Williams College in the Williams-MIT joint arts and engineering program. Following his service at Williams College, Beer joined the faculty of Lehigh University, where he taught for thirty-seven years. He held several positions, including the University Distinguished Professors Chair and Chairman of the Mechanical Engineering and Mechanics Department. In 1995, Beer was awarded an honorary Doctor of Engineering degree by Lehigh University.

Born in Philadelphia, Russ holds a B.S. degree in civil engineering from the University of Delaware and an Sc.D. degree in the field of structural engineering from The Massachusetts Institute of Technology (MIT). He taught at Lehigh University and Worchester Polytechnic Institute (WPI) before joining the faculty of the University of Connecticut where he held the position of Chairman of the Civil Engineering Department and taught for twenty-six years. In 1991 Russ received the Outstanding Civil Engineer Award from the Connecticut Section of the American Society of Civil Engineers.

David Mazurek holds a B.S. in ocean engineering and an M.S. in civil engineering from the Florida Institute of Technology, and a Ph.D. in civil engineering from the University of Connecticut. Employed by the General Dynamics Corporation Electric Boat Division for five years, he provided submarine construction support and conducted engineering design and analysis associated with pressure hull and other structures. He then taught for one year at Lafayette College prior to joining the civil engineering faculty at the U.S. Coast Guard Academy, where he has been since 1990. Mazurek is currently a member of the American Railway Engineering & Maintenance-of-way Association Committee 15, and the American Society of Civil Engineers Committee on Blast, Shock, and Vibratory Effects. He has also worked with the Federal Railroad Administration on their bridge-inspection training program. He is a licensed professional engineer in Connecticut and Pennsylvania.

Phillip J. Cornwell holds a B.S. degree in mechanical engineering from Texas Tech University and M.A. and Ph.D. degrees in mechanical and aerospace engineering from Princeton University. He is currently a professor of mechanical engineering at Rose-Hulman Institute of Technology, where he has taught since 1989. His present interests include structural dynamics, structural health monitoring, and undergraduate engineering education. Cornwell spends his summers working at Los Alamos National Laboratory, where he is a mentor in the Los Alamos Dynamics Summer School and does research in the area of structural health monitoring. He received an SAE Ralph R. Teetor Educational Award in 1992, the Dean's Outstanding Scholar Award at Rose-Hulman in 2000, and the Board of Trustees Outstanding Scholar Award at Rose-Hulman in 2001.

Brian Self obtained his B.S. and M.S. degrees in Engineering Mechanics from Virginia Tech, and his Ph.D. in Bioengineering from the University of Utah. He worked in the Air Force Research Laboratories before teaching at the U.S. Air Force Academy for seven years. Brian has taught in the Mechanical Engineering Department at California Polytechnic State University, San Luis Obispo, since 2006. He has been active in the American Society of Engineering Education, serving on its Board from 2008-2010. With a team of five, Brian developed the Dynamics Concept Inventory to help assess student conceptual understanding. His professional interests include educational research, aviation physiology, and biomechanics.