Henry Hitner and Barbara Nagle and Michele B. Kaufman and Hannah Ariel and Yael Peimani-Lalehzarzadeh Pharmacology: An Introduction https://www.mheducation.com/cover-images/Jpeg_400-high/1260021823.jpeg 8 2022 February 4, 2021 9781260021820 Pharmacology is incredibly readable, with short chapters that link theory to practice; content that is focused on the need-to-know information to not overload the reader; excellent tables and features such as Patient Administration and Monitoring Boxes; and the most up-to-date drug information.
09781260021820 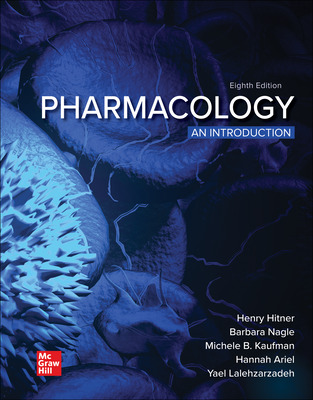 Pharmacology is incredibly readable, with short chapters that link theory to practice; content that is focused on the need-to-know information to not overload the reader; excellent tables and features such as Patient Administration and Monitoring Boxes; and the most up-to-date drug information.

Henry Hitner earned a bachelor of science degree in biology from Moravian College
in Bethlehem, Pennsylvania, and spent several years working in the pharmaceutical
industry, first as a research assistant in toxicology for Wyeth Laboratories and then
as a research pharmacologist for National Drug Company, both in Philadelphia. During
this time he earned a master of education degree in biology from West Chester University.
He attended graduate school at Hahnemann Medical College in Philadelphia,
where he earned a PhD in pharmacology. Dr. Hitner then went into academia, where
he held numerous faculty positions, first as an instructor of biology and allied health
sciences at Montgomery County Community College, followed by 30 years of teaching
and research at the Philadelphia College of Osteopathic Medicine (PCOM). At PCOM
he served as professor and vice chair of the neuroscience, physiology, and pharmacology
department. Other positions included director of the animal facility and chair of the
institutional animal care and utilization committee. Professional memberships included
the Sigma Xi Scientific Research Society and the American Society for Pharmacology
and Experimental Therapeutics. He was the recipient of the Lindback Foundation Award
for Distinguished Teaching and a Mentor Award from the National Student Association.
Henry and his wife Carlotta enjoy traveling, the beach, and time spent with family and
their nine grandchildren.

Barbara Nagle earned a master of science and doctorate at Hahnemann Medical
College and University in the department of pharmacology. Following postdoctoral
training in ocular pharmacology at Will’s Eye Hospital, Philadelphia, she taught pharmacology
and physiology to medical students at the Philadelphia College of Osteopathic
Medicine (PCOM) and to nursing students at Widener University. After several years in
academia, she moved into the pharmaceutical industry at Glaxo Smith-Kline, Endo Pharmaceuticals,
Bio-Pharm Clinical Services, ICON, and InKine Pharmaceuticals, Inc. as
Director of Clinical Information and later Vice President of Clinical Research, Training
and Quality Assurance. She has been part of the research effort to bring products through
clinical development to FDA approval such as gastric acid suppressants (antihistamines),
beta-blockers, antiinfectives, muscle relaxants, and oral contraceptives. Her most recent
affiliation was with Endo Pharmaceuticals in pain management research prior to her current
activities as consultant and educator. She has served as International Director of
Drug Development Training and Medical Education for BioPharm. Professional memberships
include the Sigma Xi Scientific Research and American Medical Writers Association.
Barbara is a freelance photographer, traveler, and silk painter.

Michele B. Kaufman, a Pharmacist at New York-Presbyterian Hospital Lower Manhattan Hospital, is also a Board Certified Geriatric and Registered Pharmacist. She has over 30 years of pharmacy experience, and earned her Bachelor of Science in Pharmacy from the University of Rhode Island (URI) College of Pharmacy, Kingston. She has worked as a Product Development Pharmacist in New Jersey, and as a Hospital Pharmacist at Robert Wood Johnson University Hospital in New Brunswick, before returning to New England (Boston), to obtain a Doctor of Pharmacy at Massachusetts College of Pharmacy/AHS. Subsequently, she completed a Fellowship in Drug Information (DI) at the URI DI Center/RWMC in Providence. Dr. Kaufman then became a Clinical Assistant Professor at St. John's University, Jamaica, New York, specializing in DI/Adult Medicine (clinical site @ LIJMC). After several years in academia she became a Geriatric Clinical Pharmacist in Corporate Managed Care, where she stayed for over a decade. She then left to pursue medical writing and health-system pharmacy practice. She is an active member of professional organizations, including American Society of Health-System Pharmacists, the Academy of Managed Care Pharmacy, the American Medical Writers Association, the American Society of Consultant Pharmacists, the New York State Council of Health-System Pharmacists, the New York City Society of Health-System Pharmacists (NYCSHP), and SWINY. She is a member of the Clinical Care Committee at Callen-Lorde Community Health Center (NYC). She has mentored numerous students throughout her years, and co-authored and published her first book (2019), a health careers book for middle grade ages and up, Healthcare Heroes: The Medical Careers Guide. She is the past recipient of two prestigious awards from NYCSHP, the Harold Neham Award (2006) for dedication and commitment to pharmacy practice and literature; and the xviii-B Joel  Yellin Award (2011), honoring significant pharmacy practice contribution. When not working, Michele enjoys traveling, spending time with family and friends, exploring new cultures, and playing musical instruments, mostly the saxophone.

Hannah (Cooke) Ariel received her Doctor of Pharmacy Degree from the University of Michigan, Ann Arbor. She was recruited by the Harvard Affiliated Hospital, Beth Israel Deaconess Medical Center, serving as a clinical pharmacist in Cardiology and General Medicine, with an adjunct appointment at Harvard Medical School as a Clinical Assistant Professor, and a full-time pharmacy practice appointment as Associate Professor of Pharmacy Practice at Massachusetts College of Pharmacy in Boston, Massachusetts. Hannah met and married Moshe Ariel of Brookline, Massachusetts and, together, they are raising their four children, Sarah, Aharon, Ariyeh, and Tova Anna in Saddle Rock, Long Island, New York. Hannah has a great love for her family, in addition for her passion for science and medicine. Hannah is a licensed Pharmacist in New York, Massachusetts, and Florida, and currently holds an adjunct faculty appointment in Chemistry and Biochemistry at Queens College, Queens, New York.

Yael Peimani-Lalehzarzadeh earned her Doctor of Pharmacy degree from The Arnold & Marie Schwartz College of Pharmacy and Health Sciences at Long Island University, Brooklyn, New York, where she graduated with honors. She was president of the American Society of Consultant Pharmacists (ASCP), LIU Brooklyn Chapter during the fall of 2014. Dr. Lalehzarzadeh has experience in both retail pharmacy and consulting for nursing homes. She is a devoted wife and mother, and cherishes every moment with her family.