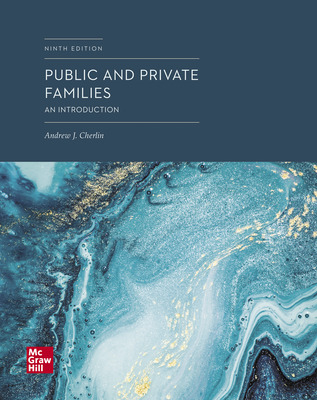 Public and Private Families: An Introduction discusses the meaning of family, how it has evolved and continues to evolve, from both a private and public perspective. Andrew Cherlin guides students through an exploration of the history of families around the world in a way that prompts critical and sociological thinking. Public and Private Families: An Introduction defines the private family as our personal space, where we live most of our personal lives. Contrastingly, the public family is where we deal with broader societal issues and challenges. Cherlin invites students to take a close look at and assessment of gender, race, ethnicity and social class. Students are simultaneously prompted to explore the impact society, the workplace and public policy have on the family and family structures. The ninth edition of Public and Private Families: An Introduction includes expanded research and discussion on LGBTQ family life, and it also includes a new section on online matchmaking and commitment.

Table of Contents
Public and Private Families: An Introduction, 9e

CHAPTER 1: Public and Private Families
CHAPTER 2: The History of the Family

Part 4 Links across the Generations

CHAPTER 9: Children and Parents
CHAPTER 10: Older People and Their Families

Andrew J. Cherlin is Benjamin H. Griswold III Professor of Public Policy and Sociology at Johns Hopkins University. He received a B.S. from Yale University in 1970 and a Ph.D. in sociology from the University of California at Los Angeles in 1976. He is the author of the McGraw-Hill textbook, Public and Private Families: An Introduction. His other books include Marriage, Divorce, Remarriage (revised and enlarged edition, 1992), Divided Families: What Happens to Children when Parents Part (with Frank F. Furstenberg, Jr., 1991), The Changing American Family and Public Policy (1988), and The New American Grandparent: A Place in the Family, A Life Apart (with Frank F. Furstenberg, Jr., 1986). In 1989-1990 he was chair of the Family Section of the American Sociological Association. In 1999 he was president of the Population Association of America, the scholarly organization for demographic research.

In 2005, Professor Cherlin was awarded a John Simon Guggenheim Memorial Foundation Fellowship. He recived the Distinguished Career Award in 2003 from the Family Section of the American Sociological Association. In 2001, he received the Olivia S. Nordberg Award for Excellence in Writing in the Population Sciences; and in 1999, he was President of the Population Association of America. He has also received a Merit Award from the National Institute of Child Health and Human Development for his research on the effects of family structure on children. His recent articles include "The Deinstitutionalization of American Marriage," in the Journal of Marriage and Family; "The Influence of Physical and Sexual Abuse on Marriage and Cohabitation," in the American Sociological Review; and "American Marriage in the Early Twenty-First Century," in The Future of Children.

He also has written many articles for The New York Times, The Washington Post, The Nation, Newsweek, and other periodicals. He has been interviewed on ABC News Nightline, the Today Show, network evening news programs, National Public Radio's All Things Considered, and other news programs and documentaries.