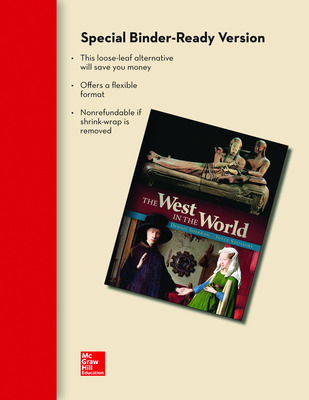 Looseleaf for The West in the World, Vol II: From the Renaissance, 5th Edition

Dennis Sherman is Professor of History at John Jay College of Criminal Justice, the City University of New York. He received his B.A. (1962) and J.D. (1965) degrees from the University of California at Berkeley and his Ph.D. (1970) from the University of Michigan . . He was Visiting Professor at the University of Paris (1978-79; 1985). He has received the Ford Foundation Prize Fellowship, the Council for Research on Economic History fellowship, and fellowships from the National Endowment for the Humanities. His publications include A Short History of Western Civilization, 8th edition (co-author); Western Civilization: Sources, Images, and Interpretations, 5th edition; World Civilizations: Sources, Images, and Interpretations, 2nd Edition (co-author); a series of introductions in the Garland Library of War and Peace; several articles and reviews on nineteenth-century French economic and social history in American and European journals, and short stories on literary reviews.

Joyce Salisbury is Professor Emerita of History at the University of Wisconsin-Green Bay, where she taught history of undergraduates for more than twenty years. She received a Ph.D in medieval history from Rutgers University in New Jersey. She is a respected historian who has published many articles and has written or edited more than ten books, including the critically acclaimed Perpetua's Passion: Death and Memory of a Young Roman Woman, The Blood of Martyrs: Unintended Consequences of Ancient Violence, The Encyclopedia of Women in the Ancient World, and the Greenwood Encyclopedia of Daily Life, which won many awards for its creative organization and timely presentation of the material. In 2010, Salisbury published a second edition of her classic work on the history of attitudes towards animals: The Beast Within: Humans and Animals in the Middle Ages. Salisbury is an award-winning teacher, who was named "Professor of the Year for Wisconsin in 1991" by CASE (Council for Advancement and Support of Education), a prestigious national organization. Since retiring from the University of Wisconsin-Green Bay, Salisbury has taught twice on Semester at Sea, a program sponsored by the University of Virginia that teaches students as they circumnavigate the world. Salisbury brought a global perspective to the history of Western Civilization while teaching abroad, and the fourth edition of The West in the World has benefitted from her interaction with students as they make sense of our twenty-first century global civilization.