Gary Clayton and Martin Gerhard Giesbrecht and Feng Guo A Guide to Everyday Economic Statistics https://www.mheducation.com/cover-images/Jpeg_400-high/1260025411.jpeg 8 2019 January 9, 2018 9781260025415 The 8th edition Guide to Everyday Economic Statistics is a handy resource for understanding common everyday economic statistics and their historical context. The authors examine how different series are constructed, how they can be interpreted, and how we may use them effectively. Students of all levels will find this guide easy to read and helpful in understanding how individual statistics relate to the economy as a whole.
09781260025415 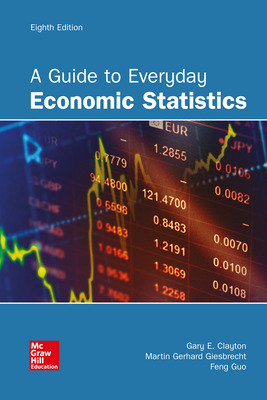 The 8th edition Guide to Everyday Economic Statistics is a handy resource for understanding common everyday economic statistics and their historical context. The authors examine how different series are constructed, how they can be interpreted, and how we may use them effectively. Students of all levels will find this guide easy to read and helpful in understanding how individual statistics relate to the economy as a whole.

Chapter 8: Stock Prices and International Trade
The Dow Jones Industrial Average
The Standard & Poor's 500
The Russell 3000 Index
The Wilshire 5000
The NASDAQ Composite
The Balance of Trade
International Value of the Dollar
Foreign Exchange

Gary E. Clayton is Professor and former Chair of the Economics & Finance Department at Northern Kentucky University. His Ph.D. in economics is from the University of Utah and he is the only American with an Honorary Doctorate from the People’s Friendship University of Russia (PFUR) in Moscow. He has appeared on numerous radio and television programs and for two years was a regular guest commentator on economic statistics for NPR’s Marketplace. In addition to his other writings and newspaper commentary, he has published five textbooks in the middle school, high school and college markets, including the best-selling Understanding Economics with McGraw-Hill Education. Professor Clayton’s web portal, www.EconSources.com, was described as “among the most useful [sites] on the web” by the Federal Reserve Bank of Boston’s Ledger.
Dr. Clayton has taught international business and economics to students in London, Austria, and Australia. He is interested in the economic advancement of developing nations and in 2006 helped organize a micro loan project in Uganda. He is a year 2000 Freedoms Foundation Leavey Award winner for Excellence in Private Enterprise Education, an Association of Real Estate License Law Officials (ARELLO) national Consumer Education Award winner, and the recipient of a national teaching award from the National Council on Economic Education. In 2005 Dr. Clayton was the recipient of Northern Kentucky University’s Frank Sinton Milburn Outstanding Professor Award.

Martin Gerhard Giesbrecht is a Professor Emeritus of Economics at Northern Kentucky University.  He has taught and/or conducted research at Stanford University, the University of Chicago, Harvard University, Indiana University, National Chengchi University (Taiwan), Rutgers University, and Wilmington College.  His doctoral degree (cum laude) was earned at the University of Munich, Germany, which he attended on a Fulbright Grant. Making economics accessible, intellectually enlightening, and even entertaining is the mission of Martin Giesbrecht’s professional life.  All of his 12 books, including this one, and his many shorter articles, some of which have also appeared in German and Chinese, are dedicated to that end, as are hi s weekly radio commentaries on WNKU and WMKV.  Because he writes and speaks in a way that people can understand, the Society of Professional Journalism bestow ed the Award for Excellence on him in 1993.  He has also won awards from the German-American Chamber of Commerce, the National Aeronautics and Space Administration (NASA), the American Society for Engineering Edu cation, the National Science Foundation, the General Electric Foundation, the Ford Foundation, the U.S. Small Business

Feng Guo is Chief Economist at Heaven-Sent Capital Management Group, one of the largest private equity firms in China, and Managing Partner and Head of the Research Institute at Zhejiang Silicon Paradise Asset Management Group. Previously, Dr. Guo was Chief Representative of Asia Pacific and Chief China Economist at the Institute of International Finance (IIF) in Washington DC for six years. He also worked as a Senior Research Economist at the Center for Economic Analysis and Development at Northern Kentucky University. From 2004 to 2008, Dr. Guo was Research Economist with The Conference Board in New York City where he specialized in the development of business cycle indices for China and in forecasting aggregate economic activities for East Asian economies.