Geoffrey Hirt and Stanley Block Fundamentals of Investment Management https://www.mheducation.com/cover-images/Jpeg_400-high/0078034620.jpeg 10 2012 June 20, 2011 9780078034626 Presenting applied theory alongside real-world examples, Fundamentals of Investment Management provides a survey of the important areas of investments: valuation, the marketplace, fixed income instruments and markets, equity instruments and markets, derivative instruments, and a cross-section of special topics, such as international markets and mutual funds. The text is user-friendly, but makes no concessions to the importance of covering the latest and most important material for the student of investments.
09780078034626 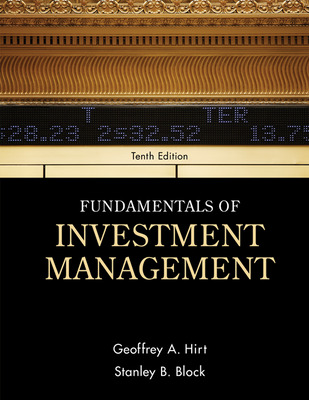 Presenting applied theory alongside real-world examples, Fundamentals of Investment Management provides a survey of the important areas of investments: valuation, the marketplace, fixed income instruments and markets, equity instruments and markets, derivative instruments, and a cross-section of special topics, such as international markets and mutual funds. The text is user-friendly, but makes no concessions to the importance of covering the latest and most important material for the student of investments.

Part One: Introduction to Investments

Chapter 3: Participating in the Market

Chapter 7: Valuation of the Individual Firm

Appendix A: Compound Sum of $1

Appendix B: Compound Sum of an Annuity of $1

Appendix D: Present Value of an Annuity of $1

Geoffrey A. Hirt of DePaul University previously taught at Texas Christian University and Illinois State University,
where he was chairman of the Department of Finance and Law. At DePaul, he was chairman of the Finance Department from 1987 to 1997 and held the title of Mesirow Financial Fellow. He developed the MBA program in Hong
Kong and served as director of international initiatives for the College of Business, supervising overseas programs in Hong Kong, Prague, and Bahrain, and was awarded the Spirit of St. Vincent DePaul award for his contributions to the university. Dr. Hirt directed the Chartered Financial Analysts (CFA) study program for the Investment Analysts Society of Chicago from 1987 to 2003. He has been a visiting professor at the University of Urbino in Italy, where he still maintains a relationship with the economics department. He received his PhD in finance from the University of Illinois at Champaign-Urbana, his MBA at Miami University of Ohio, and his BA from Ohio Wesleyan University.

Dr. Hirt is currently on the Dean’s Advisory Board and Executive Committee of DePaul’s School of Music. He served on the James C. Tyree Foundation Board and Grant Committee from 2012 to 2016. Dr. Hirt is past president and a current member of the Midwest Finance Association and a former editor of the Journal of Financial Education. He belongs to the Pacific Pension Institute, an organization of public pension funds, private equity firms, and international organizations
such as the Asian Development Bank, the IMF, and the European Bank for Reconstruction and Development.

Dr. Hirt is widely known for his textbook Foundations of Financial Management, published by McGraw Hill. This book, in its eighteenth edition, has been used in more than 31 countries and translated into more than 14 different languages.
Additionally, Dr. Hirt is well known for his textbook Fundamentals of Investment Management, also published by McGraw Hill and now in its tenth edition. Dr. Hirt enjoys golf, swimming, music, and traveling with his wife, who is a pianist and opera coach.

Professor Block is professor emeritus of financial management and investments at Texas Christian University, where he received the Burlington Northern Outstanding Teaching Award and the M. J. Neeley School of Business Distinguished Teaching Award. His research interests include financial markets, mergers, and high-yield bonds. He has served as president of the Southwestern Finance Association and is a Chartered Financial Analyst and a Certified Cash Manager. He enjoys sports and has run in the NYC Marathon. Professor Block holds a BA from the University of Texas at Austin, an MBA from Cornell University, and a PhD from LSU. In 2001, his former students established the Dr. Stan Block $1.5 million Endowed Chair in Finance at Texas Christian University. He is the first chairholder of the named chair. In 2006, he was selected as the university’s outstanding professor.