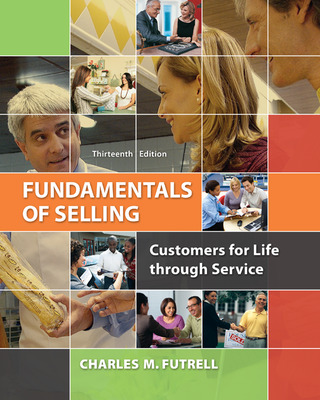 Fundamentals of Selling, 13e trains readers on a detailed, yet broad, step-by-step selling process that is universal in nature. Numerous sales personnel in the industry today have commented on how this market-leading textbook reflects what they do on sales calls with prospects and customers. The goal of Fundamentals of Selling has always been to demonstrate to students the order of steps within the selling process; provide numerous examples of what should be in each step; and show how the steps within the selling process interact with one another. Combined with up-to-date content and a strong ethical focus, the 13th edition of Fundamentals of Selling teaches sales the way a mentor would: with a strong, practical focus that puts the customer first.

Part 1: Selling as a Profession

Chapter 1: The Life, Times, and Career of the Professional Salesperson

Chapter 4: The Psychology of Selling: Why People Buy

Chapter 5: Communication for Relationship Building: It’s Not All Talk

Chapter 7: Prospecting – The Lifeblood of Selling

Chapter 8: Planning the Sales Call Is a Must

Chapter 9: Carefully Select Which Sales Presentation Method to Use

Part 4: Managing Yourself, Your Career, and Others

Charles M. Futrell is the federated professor of marketingat Texas A&M University in College Station, Texas. Hehas a B.B.A., M.B.A., and Ph.D. in marketing. Dr. Futrell is a former salesperson turned professor. Before beginning his academic career, he worked in sales and marketing capacities for eight years with the Colgate Company, the Upjohn Company, and Ayerst Laboratories.Dr. Futrell serves as a frequent reviewer for several academic journals. He is on the editorial advisory board of the Journal of Marketing Theory and Practice. His research in personal selling, sales management, research methodology, and marketing management has appeared in numerous national and international journals, such as the Journal of Marketing and the Journal of Marketing Research. An article in the summer 1991 issue of the Journal of Personal Selling & Sales Management ranked Charles as one of the top three sales researchers in America. He was also recognized in Marketing Education, Summer 1997, as one of the top 100 best researchersin the marketing discipline.Professor Futrell served as the American Marketing Association as Chair of the Sales and Sales Management Special Interest Group (SIG) for the 1996–97 academic year. He was the first person elected to this position. Charles was elected Finance Chair for the Sales SIG's 1998–99 term. In 2005, this AMA group presented Charles with its Lifetime Achievement Award for commitment to excellence and service in the area of sales. Mu Kappa Tau, the National Marketing Honor Society, recognized Charles for exceptional scholarly contributions to the sales profession in 2000. This is only the fourth time this recognition has been bestowed since its creation in 1988.Dr. Futrell has written or cowritten eight successful booksfor the college and professional audience. Two of the mostpopular books are Fundamentals of Selling: Customers forLife, Sixth Edition, and ABC's of Relationship Selling through Service, Ninth Edition, both published by McGraw Hill LLC. These books are used in hundreds of U.S. and international schools. More than 300,000 students worldwide have benefited from Professor Futrell's books. In 1997 Dr. Futrell began using his website and group e-mails in his sales classes, which often have 100 students in each section. Students sign up for both a lecture period and lab time. In each semester's six labs, students are videotaped in activities such as making a joint sales call, panel interview, selling oneself on a job interview, product sales presentations, and various experiential exercises. TAMU's College of Business Administration and Graduate School of Business is one of the largest business programs in the U.S., with more than 6,000 full-time business majors. Approximately 50 percent of the marketing department's 800 majors are in Charles's personal selling and/or sales management classes at various times. He has worked with close to 10,000 students in sales-related classes.Professor Futrell's books, research, and teaching are basedon his extensive work with sales organizations of all types and sizes. This broad and rich background has resulted in his being invited to be a frequent speaker, researcher, and consultant to industry.