Leadership is social influence. It means leaving a mark. It is initiating and guiding, and the result is change. The product is a new character or direction that otherwise would never be. By their ideas and deeds, leaders show the way and influence the behavior of others1.

To understand the importance of ideas, consider the legend of King Arthur, who led the Knights of the Round Table with his vision of chivalry:

My teacher Merlyn, who always remembered things that haven't happened better than things that have, told me once that a few hundred years from now it will be discovered that the world is round -- round like the table at which we sat with such high hope and noble purpose. If you do what I ask, perhaps people will remember how we of Camelot went questing for right and honor and justice. Perhaps one day men will sit around this world as we did once at our table, and go questing once more . . . for right . . . honor . . . and justice2.

To understand the importance of deeds, consider the storyteller Homer's account of Achilles, who led Greek warriors by his heroic feats:

So saying, he plunged once more into the fight, and man after man fell before his sword and before his spear. He raged among the Trojans like a whirlwind that drives the flames this way and that when there is a forest fire along the dry slopes of the mountains3.

History holds countless examples of ideas and acts that have determined human destiny. Consider the events put in motion and the impact on the world when 56 leaders signed the Declaration of Independence, a Unanimous Declaration of the Thirteen United States of America, in Congress July 4, 17764.

There are many ways to lead, and indeed, we are influenced by some people even centuries after they are gone. Some leaders are teachers, who are rule-breakers and value creators; some are heroes, responsible for great causes and noble works; and some are rulers, motivated principally to dominate others and exercise power. Consider how the ideas and deeds of the following teachers, heroes, and rulers have influenced the world9. 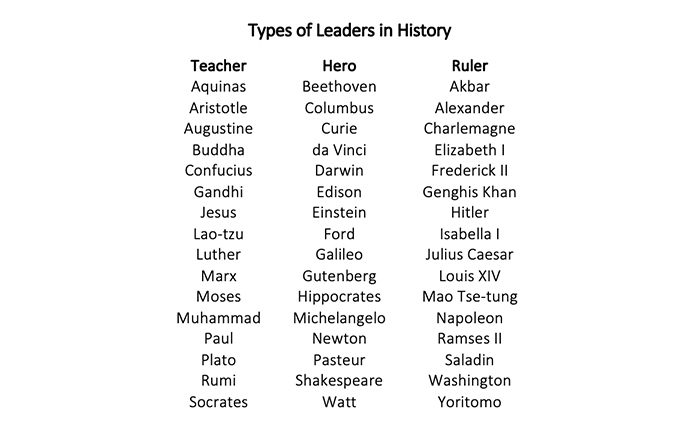 Whether one leads by word or deed; whether a leader is a teacher, hero, or ruler; whether leadership is inborn or formed -- there is an essential ingredient necessary for success. The leader must care. Only when the leader cares will others care. Only when the leader cares will there be focus and energy for the work to be done.  There are two aspects of caring leadership: First is the commitment to a task; second is a concern for people.

Theodore Roosevelt captures the spirit of the caring leader with a task to achieve:

The credit goes to the man
who is actually in the arena,
whose face is marred with
sweat and dust and blood;
who strives valiantly;
who errs and comes short again and
again; who knows the great
enthusiasms, the great devotions,
and spends himself in a worthy
cause; who at the best knows
the triumph of high achievement;
and who, if he fails,
at least fails while daring greatly.
Far better it is to dare mighty things,
to win glorious triumphs,
even though checkered by failure,
than to take rank with those cold and timid souls
who live in the gray twilight that knows not
victory nor defeat21.

With fervor and eloquence, Roosevelt blasts a life of ease and advocates a strenuous life of engagement and meaning. For the caring leader, this means personal commitment to accomplish a goal. The goal may be a one-time endeavor or a life's work. The goal may be a tangible product, such as the creation of a business, or it may be an idea or a cause, such as stamping out tyranny. In any case, the leader's commitment becomes contagious, igniting the energies of all who are present.

Caring leadership also means caring about people. Concern for others results in loyalty to the leader and dedication to the leader's goals22. Jan Carlzon, former chairman of Scandinavian Airlines, explains the importance of caring about people: "In my experience, I have learned there are two great motivators in life. One is fear. The other is love. You can manage people by fear, but if you do, it will diminish both them and you. The path to success begins in the heart23." James Autry, the former CEO of the Meredith Corporation, reminds us that caring about people must come from the heart, from within, not from policy books. Sharing the wisdom of years of experience in his wonderful book Love and Profit, Autry states, “If you don’t truly care about people, you should get out of management; it will save a lot of people a lot of trouble and maybe even a heart attack25.”

Both the commitment to a task, and concern for others must be present for caring leadership to occur. Without commitment, there is no passion, and without concern, there is no loyalty. Caring leadership cannot be legislated, and it cannot be an act. It is either present or not. When the leader cares, others become focused and energized. It is at this point that direction and momentum develop and great achievements are made.