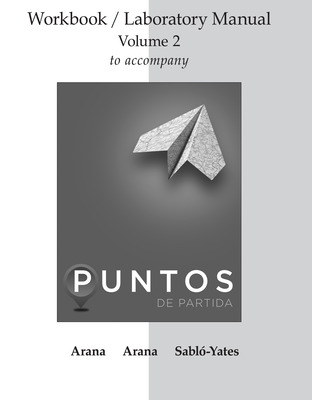 Alice A. Arana is an instructor in Spanish at Fullerton College. She received her M.A.T. from Yale University and her Certificate of Spanish Studies from the University of Madrid. Professor Arana taught Spanish at the elementary and high school levels, and has taught methodology at several NDEA summer institutes. She is coauthor of the first edition of A-LM Spanish, of Reading for Meaning-Spanish, and of several elementary school guides for the teaching of Spanish. In 1992, Professor Arana was named Staff Member of Distinction of Fullerton College, and was subsequently chosen as the 1993 nominee from Fullerton College for Teacher of the Year. She is currently serving as Academic Senate President.

María Sabló-Yates is a native of Panama. She holds a B.A. and an M.A. from the University of Washington(Seattle). She has taught at the University of Washington and Central Michigan University (Mt. Pleasant, Michigan), and is currently an instructor at Delta College (University Center, Michigan). She is the author of previous editions of the Puntos de partida Labroatory Manual, and of the first through fourth editions of the Laboratory Manual to accompany, ¿Qué tal? An Introductory Course.