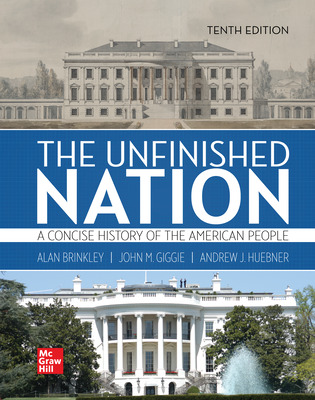 The Unfinished Nation: A Concise History of the American People, 10th Edition

The Unfinished Nation: A Concise History of the American People continues the evolution of Alan Brinkley’s influential work as authors John M. Giggie and Andrew J. Huebner build upon this canonical text, with a focus on making history relatable and accessible to today’s students. Its authorship, balanced narrative, and coverage effectuates personal connections with students drawing upon their own experiences prompting readers to interpret evidence before them and bring to the task their own questions for a continuing conversation of our ever-unfinished nation.

Table of Contents
1 THE COLLISION OF CULTURES
2 TRANSPLANTATIONS AND BORDERLANDS
3 SOCIETY AND CULTURE IN PROVINCIAL AMERICA
4 THE EMPIRE IN TRANSITION
5 THE AMERICAN REVOLUTION
6 THE CONSTITUTION AND THE NEW REPUBLIC
7 THE JEFFERSONIAN ERA
8 EXPANSION AND DIVISION IN THE EARLY REPUBLIC
9 JACKSONIAN AMERICA
10 AMERICA’S ECONOMIC REVOLUTION
11 COTTON, SLAVERY, AND THE OLD SOUTH
12 ANTEBELLUM CULTURE AND REFORM
13 THE IMPENDING CRISIS
14 THE CIVIL WAR
15 RECONSTRUCTION AND THE NEW SOUTH
16 THE CONQUEST OF THE FAR WEST
17 INDUSTRIAL SUPREMACY
18 THE AGE OF THE CITY
19 FROM CRISIS TO EMPIRE
20 THE PROGRESSIVES
21 AMERICA AND THE GREAT WAR
22 THE NEW ERA
23 THE GREAT DEPRESSION
24 THE NEW DEAL ERA
25 AMERICA IN A WORLD AT WAR
26 THE COLD WAR
27 THE AFFLUENT SOCIETY
28 THE TURBULENT SIXTIES
29 THE CRISIS OF AUTHORITY
30 FROM “THE AGE OF LIMITS” TO REAGANISM
31 THE AGE OF GLOBALIZATION


APPENDIX A-1
GLOSSARY G
INDEX I-1

Alan Brinkley (1949–2019) was the Allan Nevins Professor of History at Columbia University. He served as university provost at Columbia from 2003 to 2009. He authored works such as Voices of Protest: Huey Long, Father Coughlin, and the Great Depression, which won the 1983 National Book Award; American History: Connecting with the Past; The End of Reform: New Deal Liberalism in Recession and War; Liberalism and Its Discontents; Franklin D. Roosevelt; and The Publisher: Henry Luce and His American Century. He served as board chair of the National Humanities Center, board chair of the Century Foundation, and a trustee of Oxford University Press. He was also a member of the Academy of Arts and Sciences. In 1998–1999 he was the Harmsworth Professor of History at Oxford University, and in 2011–2012 the Pitt Professor at the University of Cambridge. He won the Joseph R. Levenson Memorial Teaching Award at Harvard and the Great Teacher Award at Columbia. He was educated at Princeton and Harvard.

John Giggie is associate professor of history and African American studies at the
University of Alabama where he also serves as director of the Summersell Center for the
Study of the South. He is the author of After Redemption: Jim Crow and the Transformation of
African American Religion in the Delta, 1875–1917, editor of America Firsthand, and editor of
Faith in the Market: Religion and the Rise of Commercial Culture. He is currently preparing a
book on civil rights protests in west Alabama. He has been widely honored for his teaching,
most recently with a Distinguished Fellow in Teaching Award and Excellence in Community
Engagement Award from the University of Alabama. He received his PhD from Princeton
University.

Andrew Huebner is associate professor of history at the University of Alabama. He is
the author of Love and Death in the Great War (2018) and The Warrior Image: Soldiers in
American Culture from the Second World War to the Vietnam Era (2008). He has written and
spoken widely on the subject of war and society in the twentieth-century United States. In
2017, he was named an Organization of American Historians (OAH) Distinguished Lecturer.
He received his PhD from Brown University.