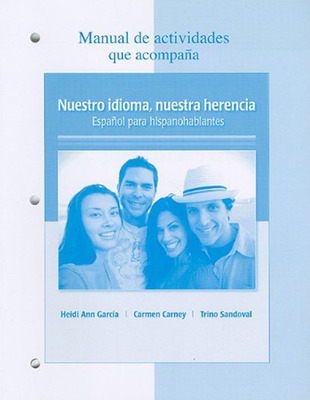 Heidi Ann García holds a Ph.D. in Latin American Literature and Culture from Arizona State University. Since 1996 she has taught several courses at the university and high school level including basic Spanish for non-native speakers, Latin American literature, and business Spanish. She has also directed several Spanish programs abroad. In addition, she has published articles on topics related to her doctoral research such as U.S. Latino-Caribbean cultural production. She currently teaches Spanish for Heritage Speakers at North High School in Phoenix, Arizona.

Trino Sandoval holds a Ph.D. in Spanish from Arizona State University. Since 1996 he has taught several courses including conversational Spanish, business Spanish, Hispanic heritage in the Southwest, and Spanish for Spanish speakers at Phoenix College, where he has also served as an administrator. He is co-translator of two books by Margarita Cota-Cardenas: Puppet (University of New Mexico Press, 2000) and Sanctuaries of the Heart (University of Arizona Press, 2005). He has also published film reviews and contributed to encyclopedia entries on Mexican film.

Carmen Carney, Ph.D., University of Iowa, is the Director of The Garvin Center for Cultures and Languages of Global Management at Thunderbird School of Global Management. She teaches Spanish for Business at Thunderbird; and Cross-Cultural Communication to MBA students in 9 countries in Latin America through interactive television broadcasting. She has been an NEH fellow at Yale University, the University of Texas-Austin, and at Arizona State University. Professor Carney has published extensively on the interrelationships of literature and the law in Don Quixote; and on literature, language, and culture and their intersection with the world of business. She also served as Editor of the Journal of Language for International Business; co-authored the book Informes y proyectos del mundo empresarial (2002), published by Arco libros and the Cámara de comercio de Madrid; and is co-author of Entre socios (2011) and Nuestro idioma, nuestra herencia (2011), both by McGraw-Hill.