Nancy Kubasek and M. Neil Browne and Lucien Dhooge and Linda Barkacs and Daniel Herron and Andrea Giampetro-Meyer and Carrie Williamson Dynamic Business Law https://www.mheducation.com/cover-images/Jpeg_400-high/1260733971.jpeg 6 2023 January 26, 2022 9781260733976 Designed for business majors taking a two semester Business Law course, Dynamic Business Law incorporates an ethical decision-making framework, an emphasis on critical thinking, and a focus on business relevance. Updated cases, new coverage on entrepreneurship and it's interface with the law, and a refreshed "Practical Tips for Business Managers" feature provides a decision-making framework to help students think critically about these evolving topic areas and apply what they are learning to business.
09781260733976 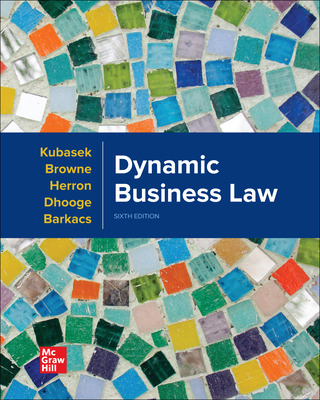 Designed for business majors taking a two semester Business Law course, Dynamic Business Law incorporates an ethical decision-making framework, an emphasis on critical thinking, and a focus on business relevance. Updated cases, new coverage on entrepreneurship and it's interface with the law, and a refreshed "Practical Tips for Business Managers" feature provides a decision-making framework to help students think critically about these evolving topic areas and apply what they are learning to business.