Tracy Terrell and Magdalena Andrade and Jeanne Egasse and Elías Miguel Muñoz Workbook/Lab Manual Part B to accompany Dos mundos https://www.mheducation.com/cover-images/Jpeg_400-high/0077304756.jpeg 7 2010 April 27, 2009 9780077304751 The Cuaderno de actividades is intended for use primarily outside the classroom. This combined workbook/laboratory manual features Actividades escritas, Actividades auditivas, Resumen cultural, Pronunciacion y ortografia, Videoteca, and Lecturas. The Preface in the Cuaderno de actividades provides a detailed description of all sections and types of activities. This version of the Cuaderno covers the second half the book, Capitulo 8-Capitulo 15.
09780077304751 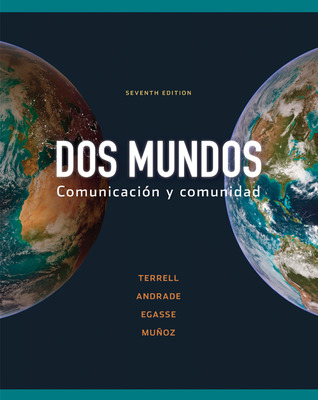 (Note: The preliminary chapters (Paso A-C) and Capítulo 1 of this Table of Contents provide a comprehensive listing of contents for those chapters, as representative of the other chapters. Capítulo 2-15 provides only the vocabulary topics and grammatical structures.)

The following lists the Enlace readings found in each chapter:

A.1 Naming and Describing: The Verbs llamar and llevar

A.2 Spelling: The Spanish Alphabet

A.3 Identifying People and Things: Subject Pronouns and the Verb ser

A.4 Identifying People and Things: Gender

A.5 Responding to Instructions: Commands

B.1 Addressing Others: Informal and Polite you (tú/usted)

B.3 Describing People and Things: Negation

B.5 Describing People and Things: Adjective-Noun Agreement and Placement

5.1 Indicating to Whom Something is Said: Indirect Object Pronouns with Verbs of Informing

6.3 Talking about Past Actions: Preterite Tense of Regular Verbs (Part 1)

7.1 Talking About Past Actions: Preterite Tense of Regular Verbs (Part 2)

7.3 More About Relating Past Events (Part 2): Stem-Changing Verbs in the Preterite

7.4 Reporting the Past: Indirect Object Pronouns with decir

8.2 More about Expressing Likes: The Verbs gustar and encantar

8.4 Expressing one or you: The Impersonal se

9.2 Expressing for, from, to whom: Prepositions + Pronouns

9.3 Saying What You Used to Do: The Imperfect Tense

9.4 Describing the Past: The Imperfect and Preterite of “State” Verbs

9.5 Saying What You Were Going to Do: The Imperfect Tense of ir + a + Infinitive

10.1 Saying What You Have Done: The Present Perfect

10.3 Expressing by, through, Destination and Time (Part 1): por and para

11.4 Talking About Past Actions in Progress: Imperfect Progressive

11.5 Saying What Was Happening: The Imperfect in Contrast to the Preterite

12.2 Expressing Changes in States: Become, get

13.3 Talking about Price, Beneficiary, and Purpose: por and para (Part 2)

14.1 Expressing each other: Reciprocal Nouns

15.1 Talking about the Future: The Future Tense

15.2 Talking about When: The Subjunctive in Time Clauses

15.3 Adding Details and Expressing Why and How: More Uses of the Subjunctive

15.6 If Clauses and the Past Subjunctive

Tracy D. Terrell (late) received his Ph.D. in Spanish Linguistics from the University of Texas at Austin and published extensively in the area of Spanish dialectology. Professor Terrell’s publications on second-language acquisition are widely known in the United States and abroad.

Magdalena Andrade received her first BA in Spanish and French and a second BA in English from California State University, San Diego. After teaching in the Calexico Unified School District Bilingual Program for several years, she taught elementary and intermediate Spanish at both San Diego State and the University of California, Irvine, where she also taught Spanish for Heritage Speakers and Humanities Core Courses. Upon receiving her PhD from the University of California, Irvine, she continued to teach there for several years and also at the University of California, Riverside, and California State University, Long Beach, where she taught the graduate foreign language methods courses and coordinated the Spanish and French TA Programs as well as the Credential Program for foreign languages. For several years she has taught at the community college level, but currently, she is taking time off from regular teaching to help dyslexic children hone their reading skills. She also tutors special-needs students taking college-level Spanish courses. Professor Andrade has coauthored the textbook Dos mundos: Comunicación y comunidad and the readers Mundos de fantasía: Fábulas, cuentos de hadas y leyendas and Cocina y comidas hispanas (McGraw Hill).

Jeanne Egasse received her BA and MA in Spanish Linguistics from the University of California, Irvine. She also holds California Credentials for Spanish as well as for Bilingual Cross-Cultural Education. Professor Egasse has taught foreign-language methodology courses and introductory linguistics, and served as supervisor of foreign language and ESL teachers in training for the Department of Education at the University of California, Irvine. From 1980 to 2020 she was a full-time professor of Spanish, coordinator of the Spanish Department, and co-chair of World Languages at Irvine Valley College. Professor Egasse continues to offer online conversation groups for local college students and volunteers for the Irvine Valley College Foundation. In addition, she serves as a consultant for local schools and colleges on implementing the Natural Approach in the language classroom. She has coauthored the first-year college Spanish textbook Dos mundos: Comunicación y comunidad and the readers Cocina y comidas hispanas and Mundos de fantasía: Fábulas, cuentos de hadas y leyendas (McGraw Hill).

Elías Miguel Muñoz holds a PhD in Spanish from the University of California, Irvine, and has taught language and literature at the university level. Dr. Muñoz is the author of Viajes fantásticos and Ladrón de la mente, titles in the Storyteller’s Series by McGraw Hill, and coauthor of the textbook Dos mundos: Comunicación y comunidad, also from McGraw Hill. He has published six novels, which include Vida mía, Brand New Memory, and Diary of Fire; two books of literary criticism; and two poetry collections. One of his plays was produced off-Broadway, and his creative work has been featured in numerous anthologies and source books, including Herencia: The Anthology of Hispanic Literature of the United States, The Encyclopedia of American Literature, W.W. Norton’s New Worlds of Literature, and The Scribner Writers Series: Latino and Latina Writers. He is currently at work on a sci-fi historical novel.