Frank Schmalleger and John Smykla CORRECTIONS IN THE 21ST CENTURY https://www.mheducation.com/cover-images/Jpeg_400-high/1260805255.jpeg 9 2021 February 13, 2020 9781260805253 Corrections in the 21st Century provides an in-depth look at the past, present, and future of corrections while also identifying the many subcomponents of modern-day corrections. It highlights the process of modern-day corrections and focuses on the issues facing the correctional enterprise today. This title provides an appreciation for contemporary real-world correctional practice, examines the opportunities represented by new and developing corrections technologies and points the students in the direction of the still emerging ideal of corrections professionalism. The text’s dual theme emphasizes professionalism and evidence-based corrections. Corrections professionalism, although not yet as well-known as police professionalism, has garnered support from policymakers and is winning respect among the public. It serves as this textbook’s organizing principle.
09781260805253 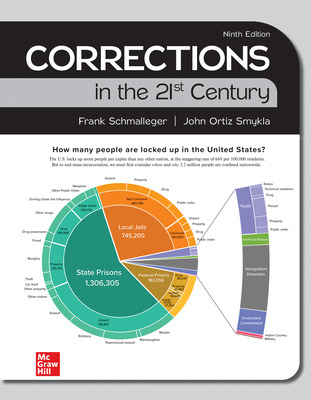 Table of Contents
Corrections in the 21st Century, 9e

CHAPTER 4: Probation: How Most Offenders Are Punished
CHAPTER 5: Intermediate Sanctions and Community Corrections: Between Probation and Incarceration

CHAPTER 9: The Staff World: Managing the Prison Population
CHAPTER 10: The Inmate World: Living Behind Bars
CHAPTER 11: The Legal World: Prisoners’ Rights
CHAPTER 12: Special Prison Populations: Prisoners Who Are Substance Abusers, Who Have HIV/ AIDS, Who Are Mentally Challenged, and Who Are Elderly

Frank Schmalleger, PhD, is Distinguished Professor Emeritus atthe University of North Carolina at Pembroke. Dr. Schmalleger holds a bach­elor’s degree from the University of Notre Dame and both a mas­ter’s and a doctorate in sociology from The Ohio State University with a special emphasis in criminology. From 1976 to 1994, he taught criminal justice courses at the University of North Carolina at Pembroke, serving for many years as a tenured full professor. For the last 16 of those years, he chaired the Department of Soci­ology, Social Work, and Criminal Justice. As an adjunct professor with Webster University in St. Louis, Missouri, Dr. Schmalleger helped develop a graduate program in security management and loss prevention that is cur­rently offered on U.S. military bases around the world. He taught courses in that curriculum for more than a decade, focusing primarily on computer and information security. Dr. Schmalleger also has taught in the New School for Social Research online graduate program, helping build the world’s first electronic classrooms for criminal justice distance learning.

Dr.Schmalleger is also the creator of a number of award-winning websites (including the former cybrary.info and crimenews.info). He is a member of the Academy of Criminal Justice Sciences, the American Society of Criminology, and the Society of Police Futurists International (where he is a founding member). Schmalleger’s author page on Amazon. com can be viewed atamazon.com/author/frankschmalleger. Follow him on Twitter @schmalleger.

Dr. Smykla has authored or edited five corrections books, including Probation, Parole, and Community Based Corrections (2013) and Offender Reentry: Rethinking Criminology and Criminal Justice (2014). His coauthored data set Executions in the United States, 1608–2003: The Espy File, funded by a grant from the National Science Foundation, is one of the most frequently requested criminal justice data files from the University of Michigan’s Inter- University Consortium for Political and Social Research.

Dr. Smykla has published more than 75 research articles on corrections and policing issues. He recently completed a multiyear analysis of federal reentry court and the impact of police body cameras.