Thomas Badey Annual Editions: Violence and Terrorism, 15/e https://www.mheducation.com/cover-images/Jpeg_400-high/1259400085.jpeg 15 2016 September 29, 2015 9781259400087 Annual Editions is designed to provide convenient, inexpensive access to a wide range of current articles from respected magazines, newspapers and journals. The articles selected are authored by prominent scholars, researchers, and commentators. Each volume has features designed to make them especially valuable for classroom use; including a brief overview for each unit, as well as Learning Outcomes, Critical Thinking questions, and Internet References for each article.
09781259400087 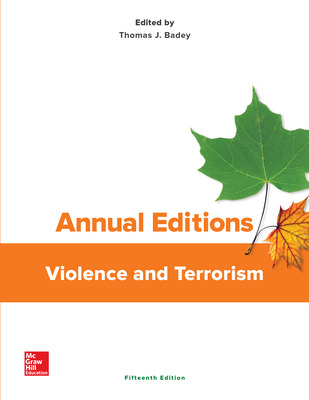 Annual Editions is designed to provide convenient, inexpensive access to a wide range of current articles from respected magazines, newspapers and journals. The articles selected are authored by prominent scholars, researchers, and commentators. Each volume has features designed to make them especially valuable for classroom use; including a brief overview for each unit, as well as Learning Outcomes, Critical Thinking questions, and Internet References for each article.

UNIT: What is Terrorism?

1. Defining Terrorism: A Strategic Imperative, Eric Chase, Small Wars Journal, 2013.
Eric Chase examines why a universally accepted definition of "terrorism" has not been developed. He suggests four steps that the EU and NATO should take to address this issue.

2. The Revised Academic Consensus Definition of Terrorism, Alex P. Schmid, Perspectives on Terrorism, 2012.
Since the 1980s Alex P. Schmid has spearheaded efforts to reach a consensus on an academic definition of terrorism. He provides his latest revision of these efforts.

3. One Man's Freedom Fighter . . . Can We Ever Define Terrorism?, Fergal Davis, The Conversation, 2013.
Fergal Davis argues that the confusion about what “terrorism” is may be overstated. He believes that the dilemma is more a function of politics than of linguistics or human understanding.

5. Age of the Wolf: A Study of the Rise of Lone Wolf and Leaderless Resistance Terrorism, Ryan Lenz and Mark Potok, Southern Poverty Law Center, 2015.
Lentz and Potok study terrorism in the United States.  They conclude that the vast majority of this type of violence is coming from “lone wolves” or “leaderless resistance” groups.

6. Urban Siege in Paris: A Spectrum of Armed Assault, John P. Sullivan and Adam Elkus, Small Wars Journal, 2015.
Sullivan and Elkus analyze the Charlie Hebdo attacks in Paris. They offer a set of questions for researchers and practitioners to consider when planning for, training to stop, and red-teaming urban siege scenarios.

7. Narcoterrorism: How Drug Trafficking and Terrorism Intersect, John Cisar, Journal of Homeland and National Security Perspectives, 2014.
John Cisar offers a working definition of narcoterrorism and links the drug trade to the funding of traditional terrorist groups such as Hezbollah, Revolutionary Armed Forces of Colombia (FARC), and Taliban.

8. The Cyber Terror Bogeyman, Peter W. Singer, Armed Forces Journal, 2012.
As we become increasingly reliant on the internet, the fear of cyber-terrorism is growing Peter Singer argues that the threat posed cyberterrorism has been exaggerated.

9. ISIS: Saudi-Qatari-Funded Wahhabi Terrorists Worldwide, Ramtanu Maitra, Executive Intelligence Review, 2014.
Ramtanu Maitra asserts that the sudden emergence of the Islamic State of Iraq and Syria (ISIS) was not “sudden” at all. It was the direct result of Saudi and Qatari funded indoctrination and training of Salafi-Wahhabi jihadis.

10. Iran’s Support for Terrorism in the Middle East, Daniel Byman, United States Senate Committee on Foreign Relations, 2012.
In his testimony to the U.S. Senate, Byman examines Iran’s motivations for sponsoring terrorist groups He argues that in order to thwart state supported terrorism, the U.S. must deny Iran reasonable deniability, raise the cost for Iranian state sponsorship, and apply diplomatic pressure.

11. Terrorism of a Bygone Era, Paul R. Pillar, The National Interest, 2012.
Globalization and the fall of the Soviet Union changed the landscape for state-sponsors of terrorism. Paul Pillar argues that state sponsorship of terrorist organizations is no longer advantageous.

12. Transnational Terrorism, Stephen Krasner, Hoover Institution, 2014.
Stephen Krasner asserts that despite the fact that another 9/11 style attack is not likely the American government will continue to overcommit resources to counterterrorism, because of human and political tendencies toward risk aversion with regard to large losses.

13. The Impact of ISIS' Mentoring of North Africa's Jihadist Groups, Alex Waterman, Consultancy Africa Intelligence, 2015.
Waterman declares that ISIS’s expansion in North Africa has been checked by its goal to establish regional dominance in areas where groups are fighting local conflicts. Nevertheless he believes that the financial, military and political growth of ISIS will lead to closer ties between ISIS and groups in North Africa.

15. The Intractable Conflict: Why Colombia's War Against the FARC Eludes Resolution, Philip K. Abbott, Small Wars Journal, 2014.
Abbott argues the length of the conflict in Colombia has created social-psychological barriers. He explains that the conflict is so deeply rooted it may just be passed down to the next generation.

UNIT: Terrorism in the United States

18. The Year in Hate and Extremism 2014, Mark Potok, Intelligence Report, 2014.
After an all-time high in 2012, there has been a significant decline in the number of hate groups in the United States. Potok posits that this decline may be the result of the co-opting of their issues by mainstream politicians, to an improving economy and to law enforcement crackdowns.

19. 2015 Sees Dramatic Spike in Islamic Extremism Arrests, Anti-Defamation League, 2015.
This ADL report indicates that the number of arrests of individuals living in the United States linked to Islamic extremist ideology has increased dramatically in the first three month of 2015. It attributes this trend to the increased role of social media in recruitment and attempts to categorize these cases.

UNIT: Terrorism and the Media

20. Media and State Sponsored Terrorism, Brett O'Donnell and David H. Gray, Global Security Studies, 2012.
O'Donnell and Gray provide an overview of the evolution of the relationship between terrorism and the media. They argue that because of its impact on contemporary terrorism, the media is an important tool in the counterterrorism arsenal.

21. Al-Shabaab and Social Media: A Double-Edged Sword, Ken Menkhaus, Brown Journal of World Affairs, 2014.
Ken Menkhaus examines how al-Shabaab has used new social media technology to wage, and sometimes win, a global media battle. He believes however, that social media have hurt al-Shabaab as much as they have helped it.

22. Before the Beheadings, Jeffrey Goldberg, The Atlantic, 2014.
Jeffrey Goldberg suggests that the job of reporters has become more dangerous because extremists no longer need journalists. Their role has been replaced by modern social media such as YouTube and Twitter.

23. Terror Returns'—Along With Media Fixations, Peter Hart, Extra!, 2013.
Peter Hart argues that media coverage of the Boston bombings underscores the fact that there is no consistent definition of terrorism in the media. He believes that for some commentators the classification of this story seemed to depend more on the suspects' nationality and religion.

25. Sociological Understanding of the Relationship between Terrorism and Religion, Hüseyin Cinoğlu, International Journal of Human Sciences, 2010.
Cinoğlu argues that religion has been used by terrorist organizations to legitimize violence, to cure alienation, to eliminate the need to appeal to larger groups, and is also used in target selection.

26. Hinduism and Terror, Paul Marshall, Hudson Institute, 2004.
Paul Marshall believes that Hindu extremism and violence have been tolerated by the Indian government and largely ignored by the United States. He believes that the growth Hindu nationalism threatens India’s pluralistic democracy.

27. Christian Extremists and Homegrown Terrorism, Tyler Huggins, Highbrow Magazine, 2014.
The author argues that while Americans have no problems with labeling other culture’s fundamental or violent sub-religions as extremists, they choose to ignore the violent actions and rhetoric of radical Christian groups. This has created a double standard of extremism in the U.S.

28. Meet the Badass Women Fighting the Islamic State, Mohammed A. Salih, Foreign Policy, 2014.
Mohammed A. Salih details the role of women in the Kurdistan Worker’s Party (PKK) fight against the Islamic State in northern Iraq through the perspective of Avesta, a 24 year old female squad commander. She is just one of roughly half of the organization’s leaders that are women.

30. Women, Gender and the Evolving Tactics of Boko Haram, Jacob Zenn and Elizabeth Pearson, Journal of Terrorism Research, 2014.
According to Zenn and Pearson, 2013 marked a significant evolution Boko Haram’s targeting and use of women. This evolution has led to gender-based changes in Boko Haram’s tactics and its use of women which have resulted in increasing gender based violence against Christians.

31. Countering Terrorism in Democracies: Fighting Fire with Fire?, Aurélie Garbay, The ECPR Standing Group on Organised Crime (SGOC), 2015.
Aurélie Garbay argues that some governments respond to terrorism by resorting to measures that breach constitutional and international constraints. She believes that fighting fire with fire is the worst response to terrorism.

32. Lessons from Colombia for Curtailing the Boko Haram Insurgency in Nigeria, Afeikhena Jerome, PRISM, 2015.
Jerome believes that despite how different the two countries may seem to be on the surface, Nigeria has much to learn from Colombia in dealing with the Boko Haram insurgency.

34. Following the Peshawar School Attack, Pakistan Moves against Domestic Terrorism, Brian M. Perkins, Terrorism Monitor, 2015.
After an attack on a Public School in Peshawar, Pakistan in December 2014, the Pakistani government implemented a 20-point National Action Plan (NAP). Perkins posits that the NAP, combined with civil society’s increased willingness to stand up to militants could reduce violence.

35. The Future of Terrorism, John T. Picarelli, National Institute of Justice Journal, 2009.
John Picarelli identifies important differences in how Bruce Hoffman and Marc Sageman, two of the foremost experts on terrorism in the United States, interpret the nature of the terrorist threat. He argues that law enforcement agencies can offer valuable insights as key contributors to this debate.

37. U.S. Eyes Anti-Piracy Effort Along West Africa Coast, Lolita C. Baldor, The Associated Press, 2013.
Lolita Baldor discusses potential future antipiracy operations along Africa's west coast. She argues that the US and its allies are increasingly concerned about potential ties between terrorist organizations and pirates in the region.

38. Reflecting on Terror after Charlie Hebdo. What Now?, William (Bill) Tupman, The ECPR Standing Group on Organised Crime (SGOC), 2015.
Tupman reflects on the future implications of the Charlie Hebdo attacks in Paris. He believes that more spontaneous acts of violence are likely, conducted by organizations that may break up as quickly as they formed.