New Survey: Fewer than Half of College Seniors Feel “Very Prepared” for a Career

The 2017 Future Workforce Survey from McGraw-Hill captures more than 5,000 college students’ hopes, worries and opinions about their preparedness for future careers 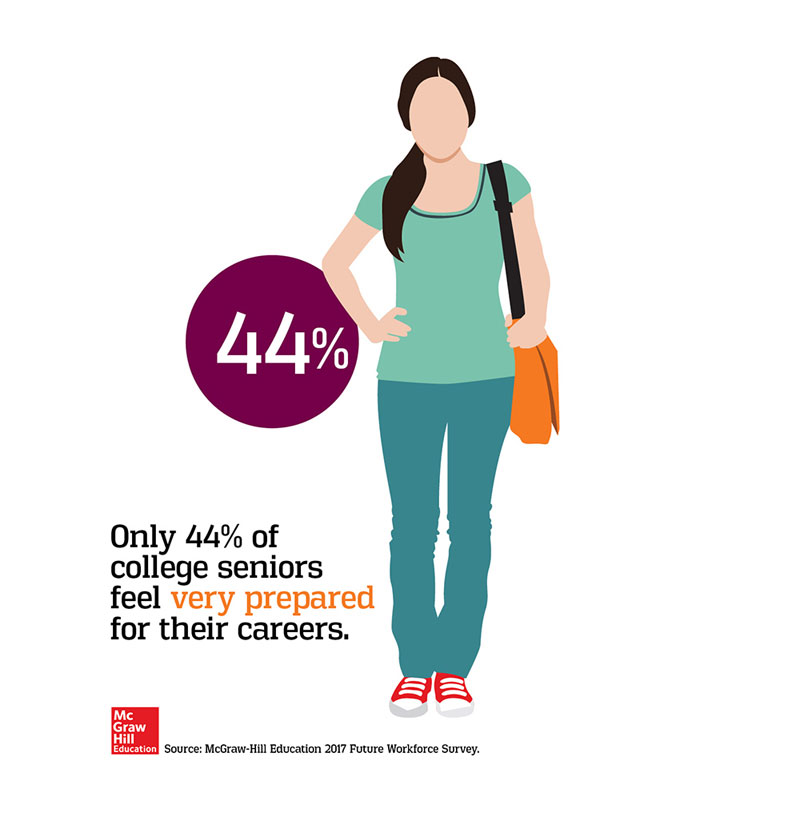 NEW YORK (May 8, 2017) – Only 44 percent of college seniors feel “very prepared” for their careers, but feelings of preparedness vary depending on a variety of factors, according to the results of McGraw-Hill's fourth annual Future Workforce Survey of more than 5,000 college students. A larger portion – 83 percent – of college seniors report feeling at least “moderately prepared,” and the skills that they feel best prepared with tend to be interpersonal skills like communication abilities and teamwork and critical thinking skills, rather than technical, presentation and networking skills.

Asked which factors would make them feel most fulfilled in their careers, students’ top three answers were: a good work/life balance, followed by attractive salary and benefits, and opportunities to learn and grow as a professional.

The full Future Workforce Survey report is available at: http://mheducation.com/future-workforce.

The survey of 5,354 students is part of McGraw-Hill's ongoing commitment to partnering with college leaders and instructors to improve student career readiness. It was conducted by Hanover Research (www.hanoverresearch.com) during March and April 2017, using an online survey. Respondents include students at two- and four-year public and private colleges, in all years of study and both in undergraduate and graduate programs.

“The workforce that today’s college students are preparing to enter is rapidly evolving due to automation, globalization and many other factors,” said David Levin, CEO of McGraw-Hill. “The results of this survey show that students feel uneasy about the transition from higher education to careers and life after graduation. We still have a long way to go in providing experiences that give students the confidence and tools to begin careers that will likely involve many different jobs and a workplace that will look much different than most do today.”

According to the survey, most students are optimistic about both their futures and the value of their college experiences.

Interestingly, students who reported that they had identified a specific career to pursue after college (76 percent of respondents) reported significantly different outlooks overall and responses across the board.

The results of the survey also shed light on the specifics of students’ career aspirations, and what motivates them:

McGraw-Hill is a learning science company that delivers personalized learning experiences that help students, parents, educators and professionals drive results. McGraw-Hill has offices across North America, India, China, Europe, the Middle East and South America, and makes its learning solutions available in more than 60 languages. Visit us at mheducation.com or find us on Facebook or Twitter.