NEW YORK – March 3, 2016 – Today the winners were announced for the 2016 Harold W. McGraw, Jr. Prize in Education, which honors innovation and has become one of the most prestigious educational awards since its founding in 1988. The Prize recognizes outstanding individuals who have dedicated themselves to improving education through new approaches and whose accomplishments are making a difference today. Honorees receive an award of $50,000 and a bronze sculpture. 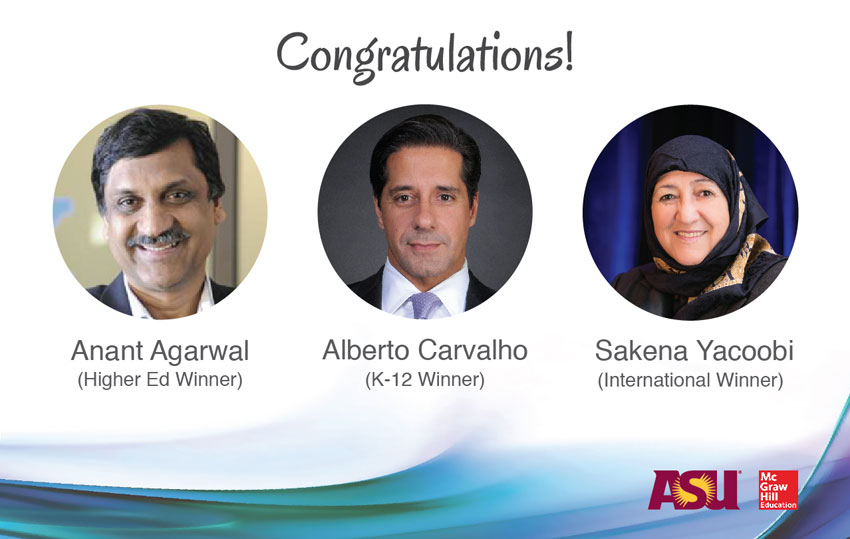 The Prize dinner and ceremony will be held at the ASU GSV Education Innovation Summit in San Diego on April 19.

“These three winners are extraordinary educational leaders who will inspire the next generation of learners around the world,” said Harold (Terry) McGraw III, former chairman and CEO of The McGraw-Hill Companies. “We are proud to have them join the other illustrious recipients of the McGraw Prize in Education.”

“Anant, Alberto, and Sakena have changed the lives of millions of students,” said David Levin, president and CEO of McGraw-Hill Education. “Their accomplishments and innovation should be lauded and shared with others who are working to make a difference around the world.”

“ASU is proud to be a part of this partnership that honors outstanding innovators in education,” said Dr. Michael Crow, president of Arizona State University. “From increasing access to education to incorporating technology in the classroom, this year’s winners have tackled some of the biggest challenges facing educators around the globe. Each of them provides an example of success from which we all can learn.”

The Prize has undergone significant changes this year as part of a new alliance between McGraw-Hill Education and ASU. This year, for the first time, the public had the opportunity to submit nominations by visiting McGrawPrize.com. Over 200 public nominations were submitted and considered alongside other outstanding individuals identified by the Prize’s dedicated research group.

The winners were chosen by Terry McGraw, David Levin and Michael Crow from a list of three finalists in each category who had been selected by a group of notable jurors, including former McGraw Prize winners.

For updates on the Prize and news from past winners, follow the conversation at #McGrawPrize.

More information about the three winners is below:

Anant Agarwal, the CEO of edX and MIT Professor, is an educational visionary. As a driving force behind the development of the MOOC (Massive Open Online Course) movement, his efforts have made possible the education of literally millions of students around the world. He is committed to the democratization of learning. Through dozens of partnerships, edX, under Agarwal’s leadership, has significantly increased access to education across the globe. You can see Agarwal’s TED talk here or learn more about edX at www.edx.org.

Alberto M. Carvalho was named National Superintendent of the Year in 2014. In 2008, he took over the nation’s fourth largest school district – Miami-Dade. Carvalho has shepherded this large district with remarkable success in what has become known as “The Miami Miracle” – narrowing the achievement gap, significantly improving graduation rates and returning the district to fiscal health. Miami-Dade now offers new programs to its 355,000 students each year including Carvalho’s brainchild, iPrepAcademy, to make sure that “one size fits none.” Carvalho is dedicated not only to ensuring student success in the classroom, but to finding solutions to the community violence that has been claiming student lives in Miami-Dade. Arriving in the U.S. at age 17 and speaking no English, Carvalho was the first person in his family to graduate from high school. You can see Carvalho’s speech at the White House here.

Sakena Yacoobi is the CEO of the Afghan Institute of Learning (AIL), which she founded in 1995 in response to the lack of education and healthcare that the Afghan people were facing after decades of war and strife. Since its founding, AIL has either directly or indirectly affected the lives of more than 12 million people. Under Yacoobi’s leadership, AIL continues as an innovative organization working at the grassroots level helping communities and individuals. She is also co-founder and Vice President of Creating Hope International (CHI) and has established private facilities in Afghanistan: four schools, a hospital and a radio station. You can see Yacoobi’s TED talk here.

McGraw-Hill Education is a learning science company that delivers personalized learning experiences that help students, parents, educators and professionals improve results. McGraw-Hill Education has offices across North America, India, China, Europe, the Middle East and South America, and makes its learning solutions available in nearly 60 languages. Visit us at mheducation.com or find us on Facebook or Twitter.