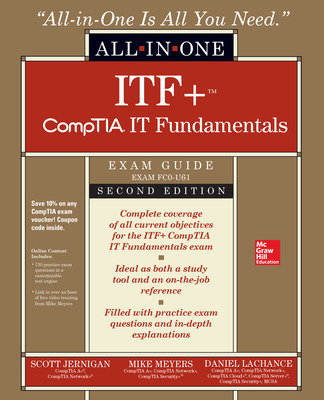 This fully updated study guide delivers 100% coverage of every topic on the CompTIA ITF+ IT Fundamentals exam Take the CompTIA ITF+ IT Fundamentals exam with complete confidence using this bestselling and effective self-study system. Written by CompTIA certification and training experts, this authoritative guide explains foundational computer technologies in full detail. You’ll find learning objectives at the beginning of each chapter, exam tips, practice exam questions, and in-depth explanations throughout. Designed to help you pass the exam with ease, this definitive volume also serves as an essential on-the-job reference. Also includes a voucher coupon for a 10% discount on your CompTIA exams! Covers all exam topics, including: • Computer basics • System hardware • I/O ports and peripherals • Data storage and sharing • PC setup and configuration • Understanding operating systems • Working with applications and files • Setting up and configuring a mobile device • Connecting to networks and the Internet • Handling local and online security threats • Computer maintenance and management • Troubleshooting and problem solving • Understanding databases • Software development and implementation Online content includes: • 130 practice exam questions in a customizable test engine • Link to over an hour of free video training from Mike Meyers

Michael Meyers, MCP, CompTIA A+, CompTIA Network+, CompTIA Security+ (Houston, TX), is one of the industry's leading authorities on CompTIA certification. He is the president and founder and Total Seminars, LLC, a major provider of PC and network repair seminars for thousands of organizations including IBM, Lucent Technologies, GE, the FBI, the FAA and the United Nations. Mike is the best-selling author of the A+ Certification All-in-One Exam Guide.

Scott Jernigan (Houston, TX) is Editor in Chief for Total Seminars. Jernigan holds a Master of Arts degree in Medieval History, and after leaving academics, Jernigan began a career in IT, working as an instructor, editor, and writer. Mr. Jernigan has edited and contributed to dozens of books on computer literacy, hardware, operating systems, networking, and certification. His is the author of Computer Literacy—Your Ticket to IC3 Certification, and is the co-author of the bestselling CompTIA A+ Certification All-in-One Exam Guide, and the Mike Meyers’ A+ Guide to Managing and Troubleshooting PCs textbook (both with Mike Meyers). He has taught computer classes all over the United States, including stints at the United Nations in New York and the FBI Academy in Quantico.

Daniel Lachance, MCITP, MCTS, CNI, IBM Certified Instructor, CompTIA A+, CompTIA Network+, CompTIA Security+, is a technical trainer for Global Knowledge and has delivered classroom training for a wide variety of products for the past 17 years. Throughout his career he has also developed custom applications and planned, implemented, troubleshot, and documented various network configurations. Lachance was the technical editor on CompTIA Network+ Certification Study Guide, Fourth Edition and other certification books.