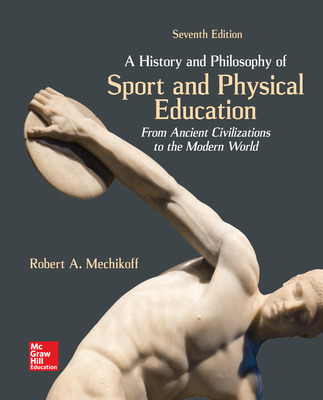 A History and Philosophy of Sport and Physical Education: From Ancient Civilizations to the Modern World, 7th Edition

A History and Philosophy of Sport and Physical Education - From Ancient Civilizations to the Modern World, has been meaningfully written to engage readers with essential information and critical introspection that is meant to inspire and educate. This edition highlights salient individuals, movements, beliefs, and events that have impacted the long and storied historical and philosophical development of sport, physical education, and kinesiology. Robert Mechikoff offers students a layered and scholarly look into the sports and physical activities of the world - ranging from Ancient Egypt, Greece, and Rome to the emergence of the professional and academic disciplines of physical education and kinesiology in the modern world, as well as the political and social modern realities of the Olympic Games.

Table of Contents
A History and Philosophy of Sport and Physical Education: From Ancient Civilizations to the Modern World, 7e

Robert Mechikoff currently serves on the faculty at UCLA where he teaches graduate courses in the Transformative Coaching and Leadership program. In addition to his faculty appointment at UCLA, he also teaches sport history and philosophy in the Kinesiology Department at California State University Fullerton. Prior to his appointment to UCLA and California State University Fullerton, Dr. Mechikoff served as a Professor in the Department of Exercise and Nutritional Sciences at San Diego State University (SDSU) from 1981 to 2010.

He has also served at faith-based schools as a Dean, Department Chair, and graduate Program Director (MA, EdD, PhD) in sports management and leadership. He was appointed as a Supervising Professor at the prestigious International Olympic Academy (IOA) in Olympia, Greece in 2001. During his tenure at the IOA, he taught the philosophy / ideology of Olympism and related topics to graduate students and visiting IOC members from around the world.

From 2001 to 2006, he worked at the ancient archeological site of Nemea in Greece under the direction of the esteemed archeologist and Classics Professor, Dr. Stephen G. Miller (1942-2021), of the University of California @ Berkeley

From 2007 to 2008, Professor Mechikoff worked in Turkey under the direction of German Professor Dr Elmar Schwertheim of the University of Munster. Dr. Mechikoff worked with colleagues from Nemea, Dr. Athena Trakadis and Dr. Barbara Riger-Dimde, where they conducted research and surveyed the ancient Greco-Roman stadium in the ancient city of Alexandria Troas.

He has conducted extensive research on the ancient and modern Olympic Games and has benefited from the expertise provided to him by the staff of the Olympic Museum in Lausanne, Switzerland on numerous occasions. He is also grateful to the members of the British Olympic Academy who, over the years, have been incredibly gracious and helpful. He is a Life Member of the International Society of Olympic Historians, long time member of the North American Society for Sport History (NASSH), National Association for Kinesiology in Higher Education (NAKEHE).

Professor Mechikoff earned a B.A. in Political Science and an M.A. in Physical Education from California State University Long Beach. He is a proud graduate of The Ohio State University where he received his PhD in Sport History and Philosophy. Early in his career, he coached high school football and water polo, served as assistant football coach and head swimming coach at both the University of Minnesota @ Duluth and San Francisco State University.