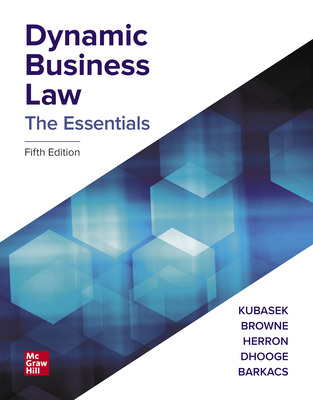 Daniel J. Herron is a professor of business legal studies in the Richard T. Farmer School of Business at his undergraduate alma mater, Miami University in Oxford, Ohio, where he earned a bachelor’s degree in English. He earned his law degree from Case Western Reserve University School of Law in Cleveland and is a member of the Ohio and federal bars. His research includes articles on business ethics plus a variety of “business and law” topics. In addition to his teaching and scholarly publications, he founded in 1994, and since then has been coaching, the James Lewis Family Mock Trial Program at Miami, a consistent top-10 program in a field of more than 300 mock trial programs nationwide. Before coming to Miami in 1992, he taught at Bowling Green State University, the University of Wyoming, the University of North Carolina–Wilmington, and Western Carolina University. He has been married for over 35 years to Deborah, and they have two children, Christopher (married to Amanda) and Elisabeth (married to Mark). They have four grandchildren—Jack, Nate, Samantha, and Wesley—plus two rambunctious beagles, Max and Missy.