Bill VanPatten and Martha Marks and Richard V. Teschner Destinos Student Edition w/Listening comprehension Audio CD https://www.mheducation.com/cover-images/Jpeg_400-high/0072525363.jpeg 2 2002 December 31, 2001 9780072525366 This video-based text for Beginning Spanish underscores McGraw-Hill’s reputation for developing groundbreaking language materials. Based on 26 hours of an engaging video drama that takes viewers around the Spanish-speaking world, Destinos is an effective program that can be used successfully in Spanish classes, as a college course for distant learners, and by individuals studying on their own.
09780072525366 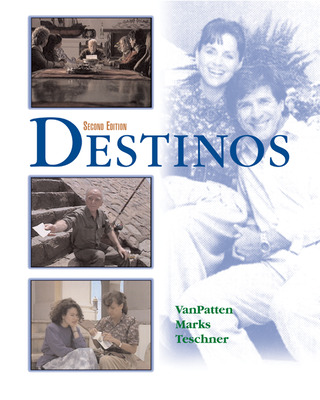 This video-based text for Beginning Spanish underscores McGraw-Hill’s reputation for developing groundbreaking language materials. Based on 26 hours of an engaging video drama that takes viewers around the Spanish-speaking world, Destinos is an effective program that can be used successfully in Spanish classes, as a college course for distant learners, and by individuals studying on their own.

Note: A comprehensive listing of contents for Lección 1 and Lección 2 is provided here, as representative of the other lessons. For Lección 3—Lección 52 only the grammatical structure of focus is indicated.

Using Verbs to Talk About Others

More About Talking About Yourself

More About Talking About Group Activities

Using Verbs to Talk About the Past

Describing What Was Happening While...

More About Using the Imperfect

More About the Imperfect

More About Using the Imperfect

Describing What Someone Was Doing

Additional Uses of Some Preterite Forms

Another Way to Talk About the Future

More About Talking About the Future

Talking About What People Want Others to Do

Expressing Your Feelings About Something

Another Way to Talk About the Future

Telling Someone to Do Something

Telling Someone to Do Something

Talking About What Someone Has Done

Talking About What You Wanted Someone to Do

More About Talking About the Past

More About Talking About the Past

Talking About What You Would Do

Quoting What Someone Said

Expressing What Would Happen If...

Talking About What Had Happened Before

More Talking About What Had Happened

Talking About What Someone Should Have Done

Bill VanPatten is Professor and Director of Applied Linguistics and Second Language Studies at Texas Tech University. His areas of research are input and input processing in second language acquisition and the effects of formal instruction on acquisitional processes. He has published widely in the fields of second language acquisition and language teaching and is a frequent conference speaker and presenter. His publications include Making Communicative Language Teaching Happen (with James F. Lee, 2003,McGraw-Hill), From Input to Output: A Teacher’s Guide to Second Language Acquisition (2003, McGraw-Hill), Processing Instruction: Theory, Research, and Practice (2004, Lawrence Erlbaum Associates) and most recently, Theories in Second Language Acquisition: An Introduction (with Jessica Williams, 2007, Lawrence Erlbaum Associates). He is the lead author of Vistazos, ¿Sabías que...?, Destinos and Sol y viento. Dr. VanPatten is the 2007 recipient of the Anthony Papalia Award for Excellence in Teacher Education, awarded jointly by ACTFL and NYSAFLT. When not engaged in academic activities, he writes fiction and performs stand-up comedy. He has recently published his first work of fiction, a collection of short stories titled Chicago Tales, published by Outskirts Press (2007).

Martha Alford Marks received her Ph.D. from Northwestern University. Co-author of ¿Qué tal? and Destinos, a Spanish video course, she also served on the Advisory Board to Boston PBS station WGBH during the development of the Destinos program, which was funded by the Annenberg Foundation. She is widely known as an ACTFL-certified oral proficiency tester and trainer in Spanish and ESL.

Richard V. Teschner received his Ph.D. in 1972 from the University of Wisconsin-Madison in Spanish Linguistics. He has taught at UW-Parkside, the University of Iowa, and (since 1976) the University of Texas at El Paso, where in 1988 he became a full professor in the Department of Languages and Linguistics. His publications include four edited anthologies, two book-length bibliographies, a placement exam, and a dictionary of Mexican-American Spanish, along with several editions of seven textbooks such as Español escrito: Curso para hispanohablantes bilingües; Destinos: An Introduction to Spanish; and Analyzing the Grammar of English: A Brief Undergraduate Textbook. He has published four dozen articles in professional journals along with an equal number of papers and keynote addresses. In 1988 he served as president of the American Association of Teachers of Spanish and Portuguese and also of the Linguistic Association of the Southwest.