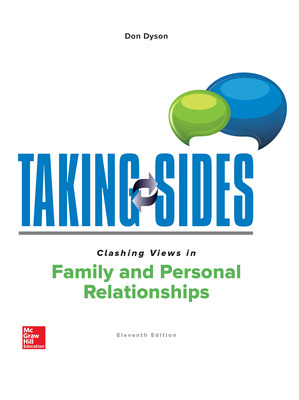 The Taking Sides Collection on McGraw-Hill Create® includes current controversial issues in a debate-style forma designed to stimulate student interest and develop critical thinking skills. This Collection contains a multitude of current and classic issues to enhance and customize your course. You can browse the entire Taking Sides Collection on Create or you can search by topic, author, or keywords. Each Taking Sides issue is thoughtfully framed with Learning Outcomes, an Issue Summary, an Introduction, and an "Exploring the Issue" section featuring Critical Thinking and Reflection, Is There Common Ground?, Additional Resources, and Internet References. Go to the Taking Sides Collection on McGraw-Hill Create® at www.mcgrawhillcreate.com/takingsides and click on "Explore this Collection" to browse the entire Collection. Select individual Taking Sides issues to enhance your course, or access and select the entire Dyson: Taking Sides: Clashing Views in Family and Personal Relationships, 11/e book here http://create.mheducation.com/createonline/index.html#qlink=search%2Ftext%3Disbn:1260181545 for an easy, pre-built teaching resource. Visit http://create.mheducation.com for more information on other McGraw-Hill titles and special collections.

Don Dyson, PhD is an Associate Professor at WidenerUniversity’s Center for Human Sexuality Studies.  Dr. Dyson received his Masters in SocialService from Bryn Mawr Graduate School of Social Work and Social Research andhis Doctorate in Philosophy from the University of Pennsylvania in EducationalLeadership/Human Sexuality.