David Olson and John DeFrain and Linda Skogrand Marriages and Families: Intimacy, Diversity, and Strengths https://www.mheducation.com/cover-images/Jpeg_400-high/1260837033.jpeg 10 2022 February 18, 2021 9781260837032 Marriages and Families provides students with the information they need to learn how to create and maintain enduring intimate relationships. Three distinctive themes of intimacy, martial and family strengths, and diversity are woven throughout the text, while integrating research, theory, and practical ideas to promote healthy and productive relationships.
09781260837032 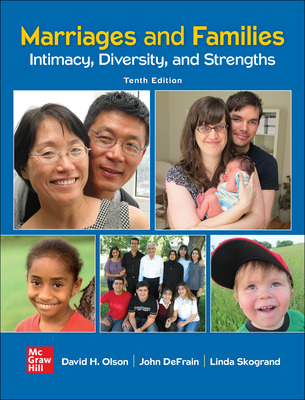 Marriages and Families provides students with the information they need to learn how to create and maintain enduring intimate relationships. Three distinctive themes of intimacy, martial and family strengths, and diversity are woven throughout the text, while integrating research, theory, and practical ideas to promote healthy and productive relationships.

Olson has written or edited more than 20 books, including Empowering Couples, Building Relationships, Families: What Makes Them Work, Circumplex Model, Power in Families, Treating Relationships, and 10 volumes of the Inventory of Marriage and Family Literature. He has published more than 100 articles with the theme of bridging family research, theory, and practice.

Olson and his colleagues at the University of Minnesota have developed the Circumplex Model of Marital and Family Systems and a variety of couple and family assessment tools, including PREPARE, ENRICH, FACES, PAIR, and AWARE.

He is happily married to Karen Olson, who has provided companionship and support throughout this and numerous other projects. They have three terrific children (Hans, Amy, and Chris), a great son-in-law (Daniel), and five wonderful grandchildren (Adrienne, Evan, Chelsea, Alex, and Ava). Olson has been blessed with a fun-loving and caring family that continues to sustain and support him.

John DeFrain is an extension professor of family and community development at the University of Nebraska-Lincoln and has focused his professional energy for the past 35 years in better understanding how families learn to live happily together.

He cofounded the National and International Symposium on Building Family Strengths, which grew into a consortium of groups organizing 35 allied conferences in the United States and around the world since 1978. Recent gatherings have been held in Australia, China, Mexico, and Korea, and upcoming conferences are planned for southern Africa, the Middle East, the Mediterranean, and the United States. His research with a team of investigators around the world has collected data on family strengths from 21,000 family members in 27 countries.

DeFrain has served as consultant to courts, universities, churches, agencies, and individual families on marriage, parenting, grief, divorce, and child custody issues. He recently received the Outstanding New Extension Family Specialist Award, and the MISS Foundation Phoenix Award for service to bereaved parents who have lost children.He has coauthored more than 60 professional articles on family issues and 18 books, including Secrets of Strong Families; Sudden Infant Death: Enduring the Loss; Stillborn: The Invisible Death; On Our Own: A Single Parent’s Survival Guide; Building Relationships; and Parents in Contemporary America: A Sympathetic View. His most recent books are: The Family Strengths Perspective: Strong Families Around the World; The Dark Thread: Surviving and Transcending a Traumatic Childhood; and Creating Strong Marriages and Families: A Strengths-Based Activity Book.

He and his wife and best friend, Nikki DeFrain, M.S., have three grown daughters connected to two sons-in-law and a great boyfriend-in-law, and a grandson. Nikki was especially important in the development and writing of this textbook, offering support in innumerable areas of the project and expertise in her own areas of study. The DeFrains are very interested in understanding family strengths and challenges from a global perspective, and have traveled and studied family relationships in 17 countries.

Linda Skogrand is an assistant professor and family life extension specialist at Utah State University in Logan, Utah. She began her professional career as a social worker in the inner-city of St. Louis, Missouri, and throughout her career has enjoyed a balance between academic institutions and social service organizations. Her current position as an extension specialist allows her to take knowledge and research findings and make them available to people in communities in Utah and throughout the nation.

Skogrand’s social service experience includes providing HIV/AIDS education programs for street kids, people in prison, and gang members, and overseeing the design of an AIDS house for the Latino population. She has also taught family courses at St. Olaf College in Northfield, Minnesota, for 17 years and was adjunct faculty at the University of Minnesota for several years.

She has published articles focusing on values in parent education, the lives of families who have experienced Sudden Infant Death Syndrome, transcendence of traumatic childhoods, spirituality, strong Latino marriages, and debt and marriage. She has co-authored several books including Surviving and Transcending a Traumatic Childhood: The Dark Thread, Coping with Sudden Infant Death, and Sudden Infant Death: Enduring the Loss. Her current research focuses on strong marriages in the Latino and American Indian cultures and she is currently conducting a national study of what makes “great” marriages with John DeFrain.

Skogrand has been married to her high school sweetheart, Steven Gilbertson, for the past seven years and resides in Logan, Utah. She has three adult children, Aaron, Jennifer, and Sara. Her children’s multiracial heritage has taught her much about diversity.