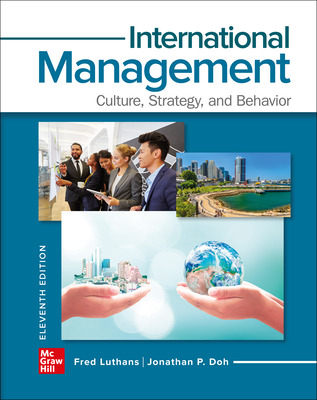 Chapter 2: The Political, Legal, and TechnologicalEnvironment

Part Two: The Role of Culture

Chapter 4: The Meanings and Dimensions of Culture

FRED LUTHANS is University and the George Holmes Distinguished Professor of Management, Emeritus at the University of Nebraska–Lincoln. He is also a senior research scientist for HUMANeX Ventures Inc. He received his B.A., M.B.A., and Ph.D. from the University of Iowa, where he received the Distinguished Alumni Award in 2002. While serving as an officer in the U.S. Army from 1965 to 1967, he taught leadership at the U.S. Military Academy at West Point. He has been a visiting scholar at a number of colleges and universities and has lectured in numerous European and Pacific Rim countries. He has taught international management as a visiting faculty member at the universities of Bangkok, Hawaii, Henley in England, Norwegian Management School, Monash in Australia, Macau, Chemnitz in Germany, and Tirana in Albania. A past President of the Academy of Management, in 1997 he received the Academy’s Distinguished Educator Award. In 2000 he became an inaugural member of the Academy’s Hall of Fame for being one of the “Top Five” all-time published authors in the prestigious academy journals. For many years he was co-editor-in-chief of the Journal of World Business and editor of Organizational Dynamics and is currently co-editor of Journal of Leadership and Organizational Studies. The author of numerous books, his seminal Organizational Behavior is now in its thirteenth edition and the 2007 groundbreaking book Psychological Capital (Oxford University Press) with Carolyn Youssef and Bruce Avolio came out in a new version in 2015. He is one of very few management scholars who is a Fellow of the Academy of Management, the Decision Sciences Institute, and the Pan Pacific Business Association. He received the Global Leadership Award from the Pan Pacific Association and has been a member of its Executive Committee since it was founded over 30 years ago. This committee helps organize the annual meeting held in Pacific Rim countries. He has been involved with some of the first empirical studies on motivation and behavioral management techniques and the analysis of managerial activities in Russia; these articles were published in the Academy of Management Journal, Journal of International Business Studies, Journal of World Business, and European Management Journal. Since the very beginning of the transition to market economies after the fall of communism in Eastern Europe, he has been actively involved in management education programs sponsored by the U.S. Agency for International Development in Albania and Macedonia, and in U.S. Information Agency programs involving the Central Asian countries of Kazakhstan, Kyrgyzstan, and Tajikistan. Professor Luthans’s recent international research involves his construct of positive psychological capital (PsyCap). For example, he and colleagues have published their research demonstrating the impact of Chinese workers’ PsyCap on their performance in the International Journal of Human Resource Management and Management and Organization Review. He is applying his positive approach to positive organizational behavior (POB), PsyCap, and authentic leadership to effective global management and has been the keynote at programs in China (numerous times), Malaysia, South Korea, Indonesia, Philippines, Singapore, Taiwan, Japan, Vietnam, Costa Rica, Mexico, Chile, Fiji, Germany, France, England, Spain, Norway, Finland, Denmark, Netherlands, Italy, Russia, Macedonia, Albania, Morocco, South Africa, New Zealand, and Australia.

JONATHAN P. DOH is Associate Dean of Research, the Herbert G. Rammrath Chair in International Business, co-faculty Director of the Center for Global Leadership, and Professor of Management at the Villanova School of Business. Jonathan teaches, does research, and serves as an executive instructor and consultant in the areas of international strategy and corporate responsibility. Previously, he was on the faculty of American and Georgetown Universities and a trade official with the U.S. government. Jonathan is author or co-author of more than 85 refereed articles published in leading international business and management journals, more than 30 chapters in scholarly edited volumes, and more than 90 conference papers. Recent articles have appeared in journals such as Academy of Management Review, California Management Review, Journal of International Business Studies, Journal of Management, Journal of Management Studies, Journal of World Business, Organization Science, Sloan Management Review, and Strategic Management Journal. He is co-editor and contributing author of Globalization and NGOs (Praeger, 2003) and Handbook on Responsible Leadership and Governance in Global Business (Elgar, 2005) and co-author of the previous edition of International Management: Culture, Strategy, and Behavior (10th ed., McGraw Hill LLC, 2015), the best-selling international management text. His current research focus is on strategy for and in emerging markets and global corporate responsibility and sustainability. His scholarly books include Multinationals and Development (with Alan Rugman, Yale University Press, 2008), NGOs and Corporations: Conflict and Collaboration (with Michael Yaziji, Cambridge University Press, 2009), and Aligning for Advantage: Competitive Strategy for the Social and Political Arenas (with Tom Lawton and Tazeeb Rajwani, Oxford University Press, 2014). He has been an associate, consulting, or senior editor for numerous journals and was editor-in-chief of Journal of World Business from 2014 to 2018. Jonathan has also developed more than a dozen original cases and simulations published in books, journals, and case databases and used at many leading global universities. He has been a consultant or executive instructor for ABB, Anglo American, Bodycote, Bosch, China Minsheng Bank, Hana Financial, HSBC, Ingersoll Rand, Medtronic, Shanghai Municipal Government, Siam Cement, and the World Economic Forum, among others. Previously, he was an external adviser to the Global Energy Resource Group of Deloitte Touche. Jonathan served for five years as a member of the Executive Committee of the Academy of Management Organizations and Natural Environment Division, a role that culminated in service as chair of the division in 2016. He was ranked among the top 15 most prolific international business scholars in the world for the period 2001–2009 (Lahiri and Kumar, 2012) and in 2015 was elected a fellow of the Academy of International Business. He has been an associate editor, special issue editor, senior editor, or consulting editor of several academic journals. From 2014 to 2018, he was Editor-in-Chief of Journal of World Business and is currently Senior Associate Editor of Journal of Management Studies. He is a frequent keynote speaker to academic and professional groups in Europe, Asia, and Latin America. He holds a Ph.D. in strategic and international management from George Washington University.