Francisco Ugarte and Michael Ugarte and Kathleen McNerney España y su civilización https://www.mheducation.com/cover-images/Jpeg_400-high/0073385204.jpeg 6 2009 October 20, 2008 9780073385204 This accessible introduction to the history and civilization of Spain is an excellent vehicle for introducing intermediate or advanced students to Spanish civilization and culture. The sixth edition retains the solid cultural and historical coverage from previous editions, while adding new information about contemporary Spain and new and revised writing and research topics.
09780073385204 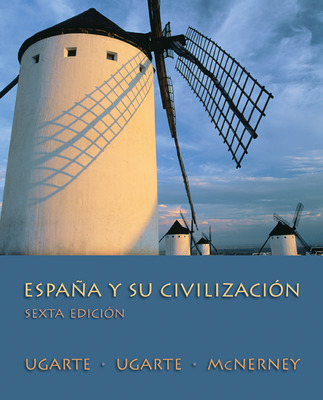 This accessible introduction to the history and civilization of Spain is an excellent vehicle for introducing intermediate or advanced students to Spanish civilization and culture. The sixth edition retains the solid cultural and historical coverage from previous editions, while adding new information about contemporary Spain and new and revised writing and research topics.

Francisco Ugarte Cristóbal (1910-1969) immigrated to the United States from Madrid in 1946. Before arriving in the United States, he was in charge of the U.S. embassy in Spain during the Spanish Civil War when the continuation of diplomatic relations between Spain and the U.S. was uncertain. He began his teaching career as an instructor of Spanish at Dartmouth College in 1947, rose through the ranks at Dartmouth, and was ultimately promoted to full professor. He wrote several widely used textbooks for students of Spanish language, literature, and civilization, among which are Beginning Spanish, Gramática española de repaso, Panorama de la civilización española, and the first edition of this book, España y su civilización (1952).

Michael Ugarte is a professor of Spanish at the University of Missouri-Columbia. He is the author of numerous studies on the modern literature of Spain, including a book on the novels of Juan Gotisolo, Trilogy of Treason. As a Guggenheim fellow, he completed a book on Spanish Civil War exile literature, Shifting Ground, and, more recently, Madrid 1900. His father, Francisco Ugarte, original author of España y su civilización, found a new home in New Hampshire after the turmoil and hardship resulting from the Spanish Civil War.

Kathleen McNerney is an ecclectic scholar whose works include studies of writers from various times and places. She is the author of books on the fifteenth-century poet Ausias March and the novelist Joanot Martorell as well as works on contemporary Catalan women writers. She has also written about Spanish, French, and Latin American authors - both classic and current. McNerney is from New Mexico and teaches literature, humanities, and women's studies at West Virginia University. In 1990, she was awarded the Catalonia Prize for diffusion of Catalan culture, and in 1995 she was designated Benedum Distinguished Scholar by her institution.