Joseph Dominick and Barry Sherman and Fritz Messere Broadcasting, Cable, the Internet, and Beyond: An Introduction to Modern Electronic Media https://www.mheducation.com/cover-images/Jpeg_400-high/0073512036.jpeg 7 2012 March 31, 2011 9780073512037 This survey of the field of modern electronic media includes the new technologies, regulations, programming, and competition that affect our world and the broadcasting industry. The text conveys the excitement of the industry in a highly accessible style that makes even the most difficult information understandable.
09780073512037 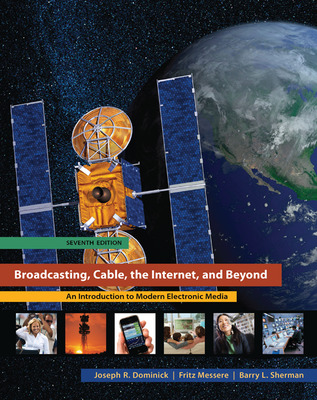 Broadcasting, Cable, the Internet, and Beyond: An Introduction to Modern Electronic Media, 7th Edition

This survey of the field of modern electronic media includes the new technologies, regulations, programming, and competition that affect our world and the broadcasting industry. The text conveys the excitement of the industry in a highly accessible style that makes even the most difficult information understandable.

2 History of Cable, Home Video, and the Internet 2

Part Two: How It Is

7 The Business of Broadcasting, Cable, and New Media

Part Five: What It Does

Joseph R. Dominick received his undergraduate degree from the University of Illinois and his Ph.D. from Michigan State University in 1970. He taught for four years at Queens College of the City University of New York before coming to the College of Journalism and Mass Communication at the University of Georgia where, from 1980 to 1985, he served as head of the Radio-TV-Film Sequence. Dr. Dominick is the author of three books in addition to The Dynamics of Mass Communication and has published more than thirty articles in scholarly journals. From 1976 to 1980, Dr. Dominick served as editor of the Journal of Broadcasting. He has received research grants from the National Association of Broadcasters and from the American Broadcasting Company and has consulted for such organizations as the Robert Wood Johnson Foundation and the American Chemical Society.

Barry L. Sherman is Lambdin Kay Professor and Director of the George Foster Peabody Awards at the Grady College of Journalism and Mass Communication, University of Georgia. Chairman of the Department and Associate Director of the Peabody Awards from 1986 to 1991, he was founding Director of the Dowden Center for Telecommunication Studies. In 1995, he was named Frank Stanton Fellow by the International Radio & Television Society in recognition of “outstanding contributions to electronic media education.” He has also been a Fellow at the National Cable Television Center and Museum in Denver and the Freedom Forum Media Studies Center in New York. A graduate of Queens College, the City University of Anew York (B.A.., 1974; M.A., 1975), and Penn State (Ph.D., 1979) Dr. Sherman teaches and conducts research in the areas of broadcast and cable management and audience behavior. His research and consulting clients have included CapCities/ABC, The Canadian Broadcasting Company, the National Association of broadcasters, Paragon, among others. He writings have appeared in a variety of professional and trade publications, including Journal of Communication, Journal of Broadcasting and Electronic Media, Communication Education, Journalism Quarterly, and Channels.

Fitz J. Messere is Associate Professor, Communications Stujdies at SUNY Oswego. He has worked extensively int he field and is an Annenberg Faculty Fellow.