Joseph Losco and Ralph Baker AM GOV https://www.mheducation.com/cover-images/Jpeg_400-high/1260242935.jpeg 7 2022 February 1, 2021 9781260242935 AMGOV brings clarity to the story of people’s relationship to government and the importance of an active and informed citizenry. Its design provides a cutting-edge approach to American Politics, and its technology components offer an active learning environment, making the study of democracy meaningful.
09781260242935 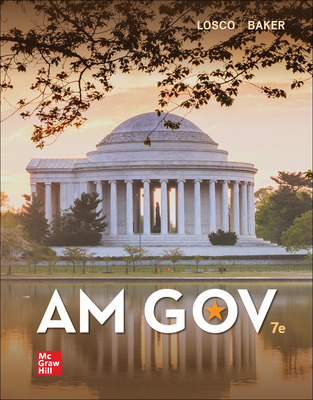 AMGOV brings clarity to the story of people’s relationship to government and the importance of an active and informed citizenry. Its design provides a cutting-edge approach to American Politics, and its technology components offer an active learning environment, making the study of democracy meaningful.

Table of Contents
1 Citizenship in Our Changing Democracy
2 The Constitution: The Foundation of Citizens’ Rights
3 Federalism: Citizenship and the Dispersal Of Power
4 Civil Liberties: Citizens’ Rights versus Security
5 Civil Rights: Toward a More Equal Citizenry
6 Public Opinion
7 Political Participation: Equal Opportunities and Unequal Voices
8 Interest Groups in America
9 Parties and Political Campaigns: Putting Democracy into Action
10 Media: Tuning In or Tuning Out
11 Congress: Doing the People’s Business
12 The Presidency: Power and the Presidency
13 Bureaucracy: Citizens as Owners and Consumers
14 The Courts: Judicial Power in a Democratic Setting
15 Public Policy: Responding to Citizens
16 Foreign and Defense Policy: Protecting American Interests in the World

Joseph Losco is professor emeritus of political science atBall State University, director emeritus of the Bowen Center for PublicAffairs, and currently adjunct professor of political science at LoyolaUniversity of Chicago. He teaches courses in political theory and Americangovernment. Losco has published in the areas of public policy and politicaltheory. His publications include Political Theory: Classic and ContemporaryReadings (Oxford University Press) and Human Nature and Politics, co-editedwith Albert Somit (JAI Press). At the Bowen Center, Losco founded and directedthe annual Hoosier Survey of public opinion and shared responsibility for theVoting System Technical Oversight Program (VSTOP), which conducts voting systemstudies for the Indiana secretary of state. His research has been funded bygrants from the Pew Charitable Trusts and the U.S. Election AssistanceCommission. He serves as consultant to VSTOP and as an expert in voting systemtechnology. Losco received his B.A. and M.A. from Pennsylvania State Universityand his Ph.D. from Temple University. He has been married to his wife Marciafor over 40 years and has a son, Michael, who practices internationalarbitration law in New York City.

Ralph Baker is an adjunct professor of political science atthe State College of Florida, where he teaches Introduction to AmericanGovernment courses. Before moving to Florida, he was a political scienceprofessor at Ball State University, specializing in American government,constitutional law, constitutional liberties, judicial politics, criminaljustice policy, and media and politics. He attended Bradley University for hisundergraduate degree and the University of Illinois for his M.A. and Ph.D. Hiswife, Chris, serves as a source of inspiration and support every day and his daughters,Caryn, Ginny, and Bridget, make him proud in the way they conduct their lives.He is the author of numerous books and articles, including The Criminal JusticeGame, Evaluating Alternative Law Enforcement Policies, Determinants of LawEnforcement Policies, State Policy Problems, and Women Government Officials inIndiana and articles concerning the Supreme Court, gender policy, the chillyclimate in academia, media and politics, and police professionalism. With JoeLosco, Baker produced over twenty political science videos, including TellyAward winners “The 1996 Campaign” and “The 2000 Campaign,” and Axiem Awardwinner “Case Studies in American Government.” At Ball State University, Bakerwon the Outstanding Teacher Award and served several terms as the president ofthe Indiana Political Science Association.